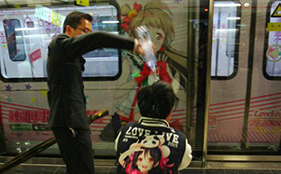 Above we see said fans embarrassing themselves and their families by taking part in this strange ritual. Luckily for them their faces aren’t shown in the photos.

It seems like an innocent enough (albeit extremely weeaboo) display, but apparently it was causing problems, as these kneeling nerds were getting in the way of commuters getting onto and off the trains. As a result, one brave knight decided to rescue the waifus from their worshippers and rain watery justice down upon them.

It seems like a rather harsh thing to do, but we all know that one guy who won’t shut up about waifus and memes, and will pull stunts like this with zero intention of seeming ironic. (We all know that one guy who claps his hands together and says itadakimasu~ before eating. Heck, I am that guy.) But now imagine all those one guy’s congregating in this one subway station, stinking it up for everyone else. Well, the aquatic assailant was justified in this case, some would say.

What do you think about this situation? Would you be annoyed by these rabid members of the fandom or would you be among them? Let us know in the comment’s section below! Until next time, Tomoki signing out!