It has been revealed that a new Lupin III will receive a TV anime special that will air on NTV on January 8 starting at 9:00 p.m. The special, titled “Lupin III Italian Game,” will air during NTV’s weekly “Friday Roadshow” programming block. The story will focus on Rebecca Rosselini, a business owner who has been kidnapped. Lupin attempts to rescue her when he hears about the incident. During the mission, Lupin receives a note by someone named “The Masked Count,” challenging him to obtain Count Cagliostro’s inheritance first. 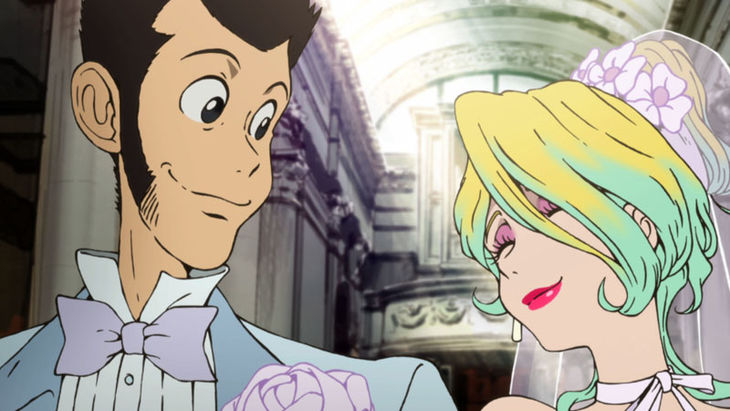 In addition to this, a new Christmas visual for this year’s new Lupin series, Lupin III 2015 anime, has been featured as a poster in the January 2015 issue of Animage. You can purchase issue here (get 5% off with coupon code MOE-N3Y-4YW0QK).

Here’s the opening theme animation with the 2015 version of the classic “Theme From Lupin III” song by original composer Yuji Ohno:

Lupin III, also written as Lupin the Third or Lupin the 3rd, is a Japanese manga series written and illustrated by Monkey Punch. It follows the escapades of master thief Arsène Lupin III, the grandson of Arsène Lupin, the gentleman thief of Maurice Leblanc’s series of novels.

The Lupin III manga, which first appeared in Weekly Manga Action on August 10, 1967, spawned a media franchise that includes numerous manga, two versions of an anime pilot film, five animated television series, six theatrically released animated feature films, two live-action films, a two-part animated theatrical short film, five OVA works, twenty-five animated television films, two musicals, music CDs, and video games. Many different companies have owned the English-language distribution rights to various Lupin III properties at various times, with just the first two animated films having been released by over 10 companies alone. Tokyopop acquired the license to the original manga in 2002, and later the second series in 2004. Funimation Entertainment purchased the rights to several of the television specials and films in 2002, and the fourth television series in 2012. Geneon licensed and dubbed 79 episodes of the second television series, 26 of which were broadcast on Cartoon Network’s Adult Swim during 2003. Discotek Media licensed the entire first television series and the first live-action film, they also own the rights to several other Lupin titles, including some previously released by other companies.

Nearly fifty years after its creation, Lupin III remains popular, with the fifth anime series airing in Italy in 2015. For several years, issues relating to the copyright of Maurice Leblanc’s intellectual property meant that the Lupin name was removed from its releases outside of Japan, usually changed to “Rupan” or “Wolf”. However, the copyright has since expired, allowing foreign releases to use the Lupin name.