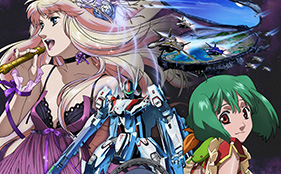 The official website of the Macross franchise revealed that Macross Delta began streaming a new commercial on Friday for the upcoming New Year’s Eve special on TV this year. The staff of the anime have hinted that the special will also be airing the first full episode. The anime is a direct sequel to the 2008 anime Macross Frontier, set 8 years after its events.