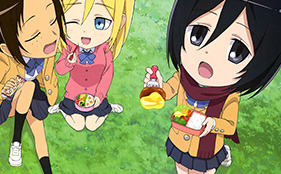 A brand new visual of the TV anime adaptation of Saki Nakagawa’s Attack on Titan: Junior High(Shingeki! Kyojin Chuugakkou) parody manga has been featured in the December 2015 issue of the Japanese anime magazine NyanType. You can purchase this issue of NyanType magazine here and view the other posters that came in this issue here.

In addition to this, another visual has been featured in the September issue of Animedia as a poster. The new visual features Eren, Levi and Mikasa in their new chibi-like state. This issue of the magazine can be purchased here.

The manga itself is a parody of Hajime Isayama’s Attack on Titan (Shingeki no Kyojin) where it follows the main characters of the series as if they were attending a school, Titan Jr. High. The anime will be a TV series began its broadcast on MBS from October, in the Fall/Autumn 2015 anime season.

The preview video for the second season was recently revealed: