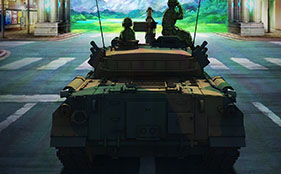 The official website for the upcoming TV anime adaptation of  Yanai Tagami’s light novel series Gate: Jieitai Kanochi nite, Kaku Tatakaeri (Gate: The Self-Defense Forces Fight Like This in Another Land) was launched today. A promotional video was streamed on the website for the announcement of the series being green-lit.