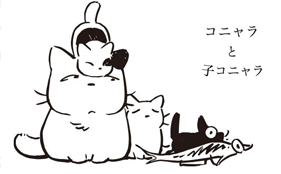 A 30-second animated commercial for Japanese food and manufacturing conglomerate Nisshin Seifun has been streamed on Sunday by Studio Ghibli.

Katsuya Kondo (Ponyo, From Up on Poppy Hill) made this hand-drawn spot in the Japanese sumi-e painting style, and Yano Akiko‘s music is also featured in the video. For more information visit the Japanese Nisshin website.

The main cat character was based on Ghibli producer Toshio Suzuki‘s illustration and he has already appeared in a bunch of other commercials since 2010, as you can see below.

The famous Studio Ghibli has still not announced any other movies, but as you can see, they are still making animation.