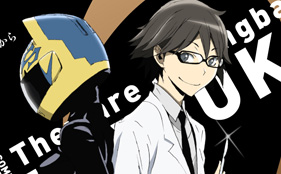 The official website for the Durarara!! anime has been counting down to the first cour of Durarara!!x2 Shou, the second season of the adaptation of Ryohgo Narita and Suzuhito Yasuda’s light novel series. The accounts have been releasing new images every day since the New Year counting down to the anime’s debut on the 10th. As of this post, there are only 2 days left until the debut of Durarara!!x2 Shou on Tokyo MX at 11:30pm JST. Here are the main images of the countdown starting from 9, which released on New Year’s day, and new images release every day at 12:00pm JST.

In addition to the images, a countdown video has also been released, which features Celty: