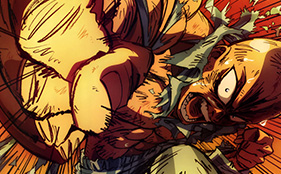 The official website of the anime adaptation of ONE and Yuusuke Murata’s One Punch-Man manga has revealed that the second limited-edition Blu-ray and DVD release of the series will include an OVA listed as “OVA #02.”

The OVA with the first volume is titled “Hanashibeta-sugiru Deishi” (The Pupil Who Is an Extremely Poor Talker) and is a 10 minute special of original story, written by ONE himself. The second volume will release on January 29 and will contain additional goodies aside from the OVA: