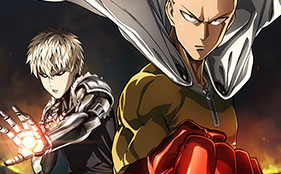 The official website for the upcoming anime adaptation of ONE and Yuusuke Murata’s One Punch-Man manga has revealed character designs for the two new cast members that will voice the characters Sonic and Tatsumaki in the October anime series.

The three new members of the One Punch-Man anime cast that have been revealed are:

The two will join the main cast with: