An information poster was made by a Japanese government cyber security organization detailing the dangers players face when exploring the world of Pokemon Go, anticipating its eventual release in its home country.

The National Center of Invident readiness and Strategy for Cybersecurity (NISC) posted the “Message for Pokemon Trainers♪” on their official Twitter and LINE accounts on July 20. We want our future Pokemon trainers to stay safe. 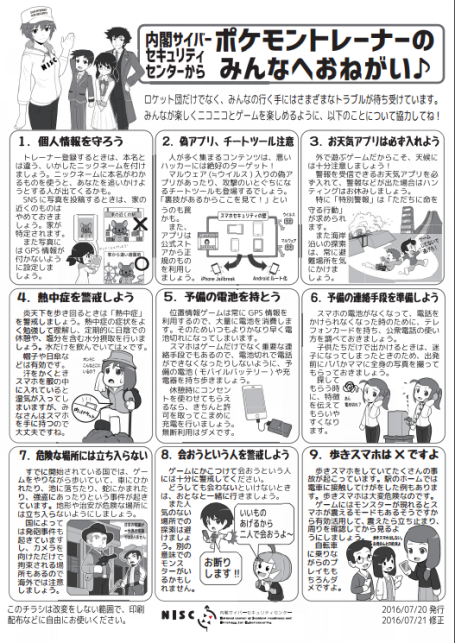 The nine-point safety plan details the things we need to look out for once the citizens of Japan begin playing.

They are as follows:

You should use a nickname instead of your real name. “Let’s not take photos near our house and post them on social media.”

Be careful of fake apps and cheat tools

These can render you susceptible to hackers or viruses.

The weather can take a turn for the worst, so be aware and check the weather forecast for the day.

Be careful of heat stroke

Japan is a very hot and humid country where heatstroke has gotten serious in recent years.

Carry a portable battery for your phone

Pokemon Go will use up a lot of your phone battery so bringing a backup is essential to your Pokemon journey. (There’s also a battery saver mode in the app itself).

If your phone does run out of battery, have a phone card ready so you can reach your family on a public phone in case of emergency.

While we know how tempting a Pikachu can be, the NISC notes that in countries where the game has already been released, a number of incidents have occurred where people were injured in areas they shouldn’t attempt to catch Pokemon.

Be careful of people who say they want to meet you

This is related to the previous entry, warning future players to stay safe and wary. There have already been Pokemon Go players mugged.

Do not walk while using your phone

Stay aware of your environment and be safe out there, trainers!

Pokemon Go has taken over the world yet people in Japan are still awaiting its official release!