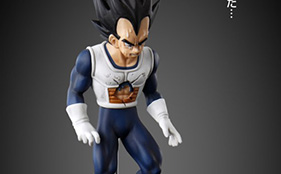 Premium Bandai have revealed a new figure based on the scene where Vegeta is overwhelmed by Frieza’s final form in the Dragonball Z series. The figure will retail for 4,949 yen ($43.64) including tax. Reservations for the figure will stay open until March 31 and the figure is expected to ship in June.

A teaser video for the video was also revealed: