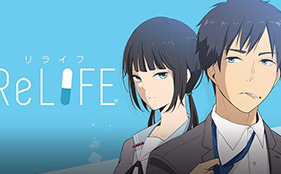 The official website for the anime adaptation of Sou Yayoi’s ReLIFE web manga has revealed that it is currently in production for this year. It has also been revealed that TMS Entertainment (Yowamushi Pedal, Detective Conan) will produce the upcoming anime. The first members of the anime’s voice cast will be revealed in the manga’s 5th volume, which will be released in Japan on February 12. The cast for main characters Arata Kaizaki and Chizuru Hishiro will be announced in the volume. Additional information will also be revealed at the series’ event on Anime Japan, on March 26.

In addition, a new visual has been revealed for the series: Announcement video for the anime:

ReLIFE is an ongoing Japanese fantasy drama seinen web manga series written and illustrated by Sou Yayoi. It’s published by NHN PlayArt on comico website since October 12, 2013 and has three volumes compiling the chapters published by Earth Star Entertainment released so far. It has been announced that a television anime adaptation has been greenlit and will air in 2016.

The story follows Kaizaki Arata, a 27-year-old jobless man, who fails at every job interview he had after quitting his last company. His life changes after he met Yoake Ryou of the ReLife Research Institute, who offered him a drug that can change his appearance to 17-years-old and to become a subject in an experiment for one year. Thus, he begins his life as a high school student once more.

The ReLIFE anime adaptation is currently scheduled to be broadcasted this year. Additional information will be revealed with the manga’s 5th volume and at the live event at Anime Japan on March 26.