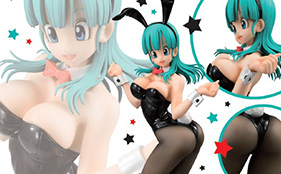 She stands at 19 cms tall and can be seen wearing a black headband with black rabbit ears, a white shirt collar with a red bowtie, a black leotard with a white cotton tail, a pair of black tights, a pair of red high heels with ankle-straps, and a pair of white shirtcuffs. She’ll be shipping in March 2016 for a total of 9,504 yen ($77.2).