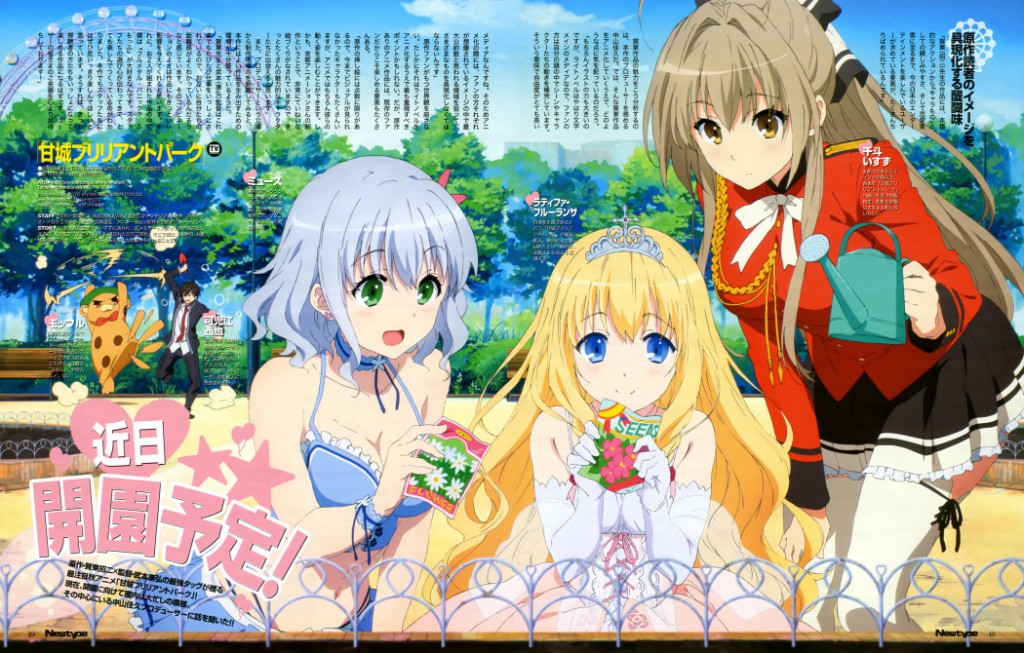 Some of you guys might be thinking: ‘”Big Sister” Rii is doing Amagi Brilliant Park again?’ Yep I’m doing it again, this one last review of it. If any of you have seen my previous articles where I talk about Amagi Brilliant Park, there’s no real need to dive into reasons why I watched it anymore. If you’re wondering my thoughts on it up until this point, you can look at my previous thoughts on it here (First Impressions), and here (Fall 2014 Impressions).

First things first: Yes, the main characters names do sound familiar. Kanie, Sento, and Latifa are their names. Yes, they are a reference to Kanye West, 50 Cent, and Queen Latifah. Go figure. Seiya Kanie is an ace student, excelling at everything he does. He knows how perfect he is and flaunts it. This catches the attention of Isuzu Sento and she asks him, at gunpoint, to go out on a date with her to Amagi Brillaint Park. Amagi Brilliant Park is a run-down amusement park that is struggling to stay afloat. Its rides are breaking down, part of the staff are not even at their stations, and the cast members are in disarray, giving poor performances. After having a miserable time at the park, Sento brings Kanie with her to meet the park’s manager, a young girl named Latifa Fleuranza. Upon meeting with him, Latifa tells Kanie that Amagi Brilliant Park is actually run by residents of a magical realm called Maple Land. She asks that he run Amagi Brilliant Park, as it is on the verge of shutting down. If the park is shut down, the residents of Maple Land will have no home, as they had lost their previous home in the past. The goal is to reach 250,000 guests in 3 months as the minimum for keeping the park open. To help him believe her story, Latifa grants him the power to read minds, although he can only use it once per person. The story follows Kanie as he attempts to fix Amagi Brilliant Park‘s problems as the general manager. 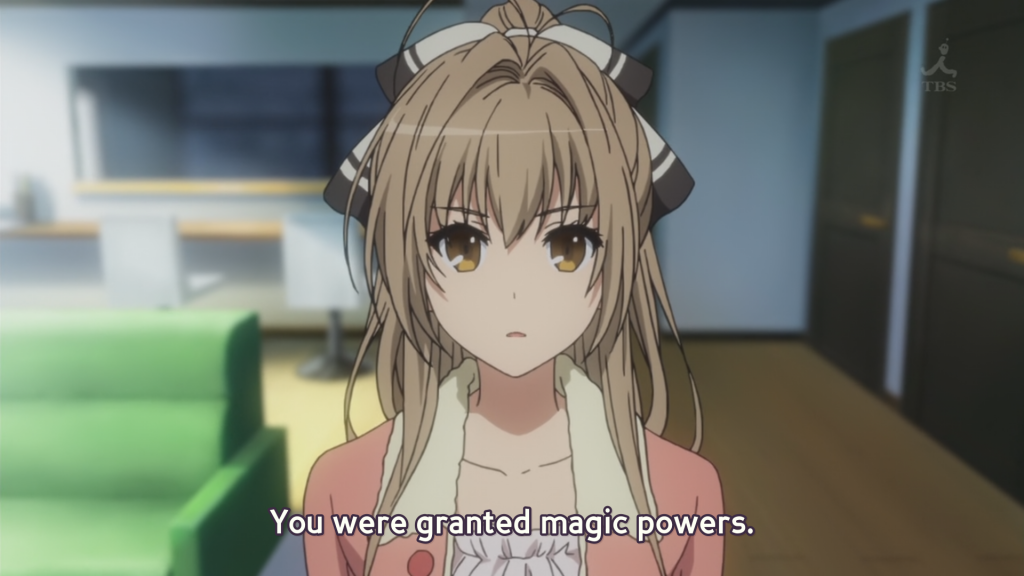 The story of Amagi Brilliant Park starts off a little slow and it does get sidetracked a little bit, but overall it was well-paced. There was steady progress throughout the story, whether it was from a plot perspective or character development perspective. Every episode, with the exception of a couple, felt purposeful. The story doesn’t really kick in until the second half of the anime, so they spend the first half setting up the characters, and they do it very well. There’s a big cast of characters, and they managed to find a way to make almost everyone seem important in one way or another. Keeping up a good amusement park is a team effort after all.

Amagi Brilliant Park has 13 episodes, but it basically finishes in 12. The 13th episode is almost like an OVA in the way it is presented, and the 12th episode finished strong. If you look over episode 13 as an extra episode, Amagi Brilliant Park had a good resolution to its story, unlike other KyoAni anime of late. The only real unresolved part is Sento and Kanie’s relationship which never was really brought out that much at all in the anime. I’m almost tempted to drop the romance genre from the list, given how little focus actually went towards developing their relationship. Depending on how you look at it, you could even ship Kanie with the other female protagonist, Latifa, because of how much they focus on Latifa in the final episodes. I’m keeping it only because it is obvious that Sento likes Kanie, especially around the halfway mark. It’s a shame, because having a 13th episode would have given them plenty of time to wrap up the romance story, but they chose to do another regular episode instead. Maybe we can hope for an Amagi Brilliant Park movie. It seems that’s where KyoAni’s romance writers do their best work (The Disappearance of Haruhi Suzumiya, Tamako Love Story, upcoming Kyoukai no Kanata movie).

Being a Kyoto Animation anime, this has high production values when it comes to its art and animation. It looks similar to other anime they have made. Think back to anime like Hyouka or Kyoukai no Kanata, and you have the general idea. Amagi Brilliant Park is drawn very well, with nice bright colours to bring out the light-hearted nature of the show. The whole fairy tale feel of the anime can also be seen through its art style. The animation also isn’t too bad either. Overall, and as expected, another good looking anime from KyoAni.

Kyoto Animation, I’ve noticed anyway, has a tendency to hire voice actors, particularly females, that haven’t had a big break yet for their main characters, supported by one or two veteran voice actors for another one of their mains. For example, all of K-On!‘s voice actresses (Aki Toyosaki, Yoko Hikasa, Minako Kotobuki, Satomi Sato, and Ayana Taketatsu) were rookies when they were hired. Aya Hirano had yet to hit it really big until she voiced Haruhi Suzumiya. Risa Taneda has been on the rise since she voiced Mirai Kuriyama in Kyoukai no Kanata last year. Amagi Brilliant Park continues this trend by bringing in voice actresses Ai Kakuma (Ruuko Kominato from Selector WIXOSS) and Yukiyo Fuiji (Tetora in Log Horizon Season 2). The characters I listed are their biggest roles that I could find. They voice Sento and Latifa respectively. They are supported by Kouki Uchiyama (Raku Ichijo from Nisekoi, Yoshino Takigawa from Zatsuen no Tempest) as Kanie, providing the veteran talent.

I am happy to report that Amagi Brilliant Park keeps up KyoAni’s tradition of having great OPs and EDs, in my opinion anyway. Both the OP, エクストラ・マジック・アワー (Extra Magic Hour), and the ED, エレメンタリオで会いましょう！ (Elementario de Aimashou!) help capture the light-hearted tone of the show as well as its fantastical side. The rest of the soundtrack doesn’t stand out as well, but there are a couple of that do hold up pretty well.

I am happy that Kyoto Animation has managed to successfully find its footing in the storytelling department once again. The last couple of times it has attempted to tell a story has ended in rushed endings that could have been avoided if they focused less on slice of life and more on the plot or its characters. While it’s nothing groundbreaking or anything that will amaze you it’s an enjoyable watch, particularly if you’re looking for an an anime to easily get into. It has a nice light-hearted story mixed with some solid voice acting, visuals, and characters. So what are you waiting for? Head on over to Amagi Brilliant Park! 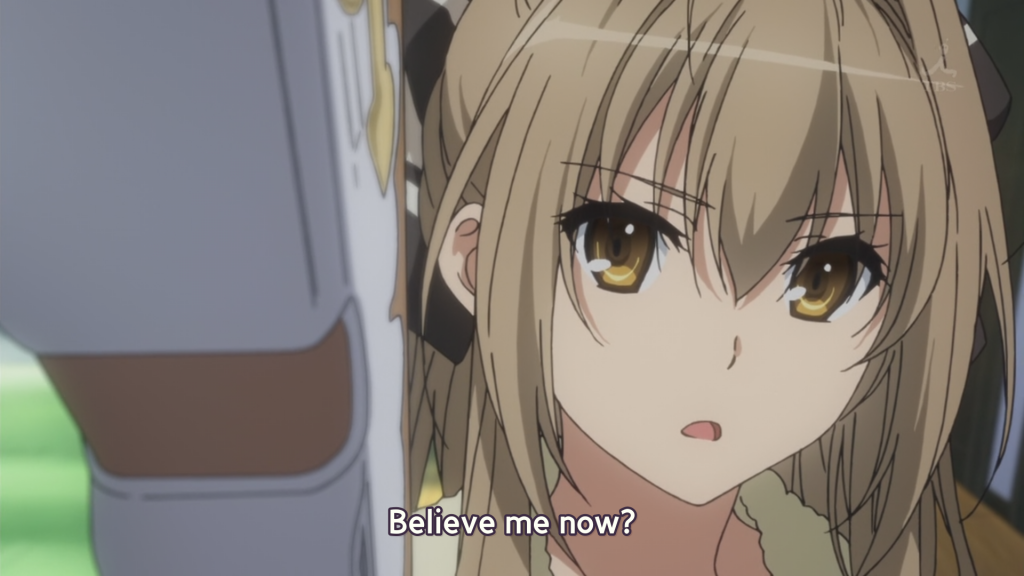 + Good ending (to the regular story)

– Episode 13 (not being the concluding episode)

So, what did you guys think of Amagi Brilliant Park? Let me know in the comments!