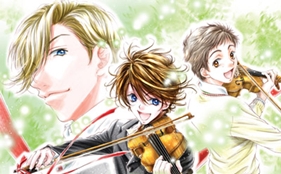 According to the official page for Shinshokan’s Wings magazine’s Issue Preview, Chigusa Kawai’s (Kamitsukitai, La Esperança) manga, 101 Hitomi no Alice (Alice the 101st), will end in the April 2015 issue of the magazine which will be released on February 28, 2015. 101 Hitomi no Alice is a dramatic-music shoujo manga that began publishing on June 2007 under Shinshokan. The manga has currently eight compiled manga volumes. The first volume was published on November 10, 2007 while the latest volume was published on June 25, 2014. The manga was licensed in North America by Digital Manga Publishing and currently has four compiled English manga volumes. The latest volume of the English version of the manga was released on June 25, 2014. Synopsis of 101 Hitomi no Alice from Digital Manga Magazine:

Mondonville Music Academy attracts thousands of elite musician applicants from around the world, but only 100 students are accepted into the program each year. But this year, Alistair Lang-who has no formal music training and is unable to even read a music score-is somehow accepted into the program as the 101st student! His classmates wonder how he even made it into the program, and proceed to treat him like an outcast, calling him, “the 101st”. One day, during a violin lesson, Alistair steps up and begins to play his violin…