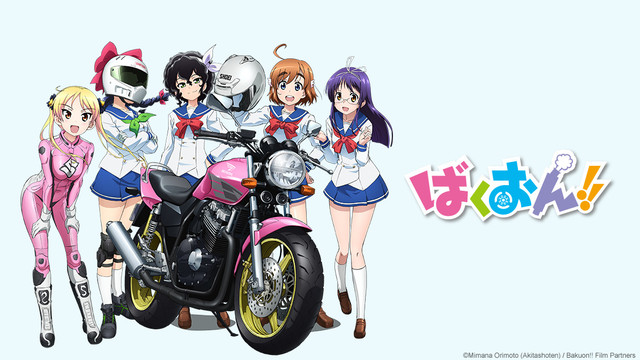 When I first saw the title and the concept, I thought I had found my big moe fix for the season. With that title, it seemed like they were trying to bring K-On!‘s spirit into this anime, which got me kind of excited. K-On! is still the standard at which I measure comedy/school/slice of life moe anime’s worth, but most don’t come close to it. How would a show do when it wants to be exactly like K-On?

Hane Sakura is an absent-minded girl who lives without much of a purpose in her life. In high school, she wants to become more involved and she decides she wants to join a club. A fellow classmate, Onsa Amano, passes by her on the way to school on a motorcycle. This inspires Hane so she goes with Onsa to the school’s Bike Club, in which the only member is a silent, Stig-like girl, Raimu Kawasaki. After Raimu takes Hane on a motorcycle ride, Hane begins to take motorcycle lessons as she is a total beginner to the motorcycle world. Along the way, she meets another bike rider, Rin Suzunoki, who has a huge love of anything made by Suzuki, and Hijiri Minowa, a rich girl that dreams of becoming a delinquent. Hijiri herself can’t ride, but she travels in a sidecar with her half-Russian, half-Japanese butler, Hayakawa. The anime follows these girls as they hang out in the Bike Club. 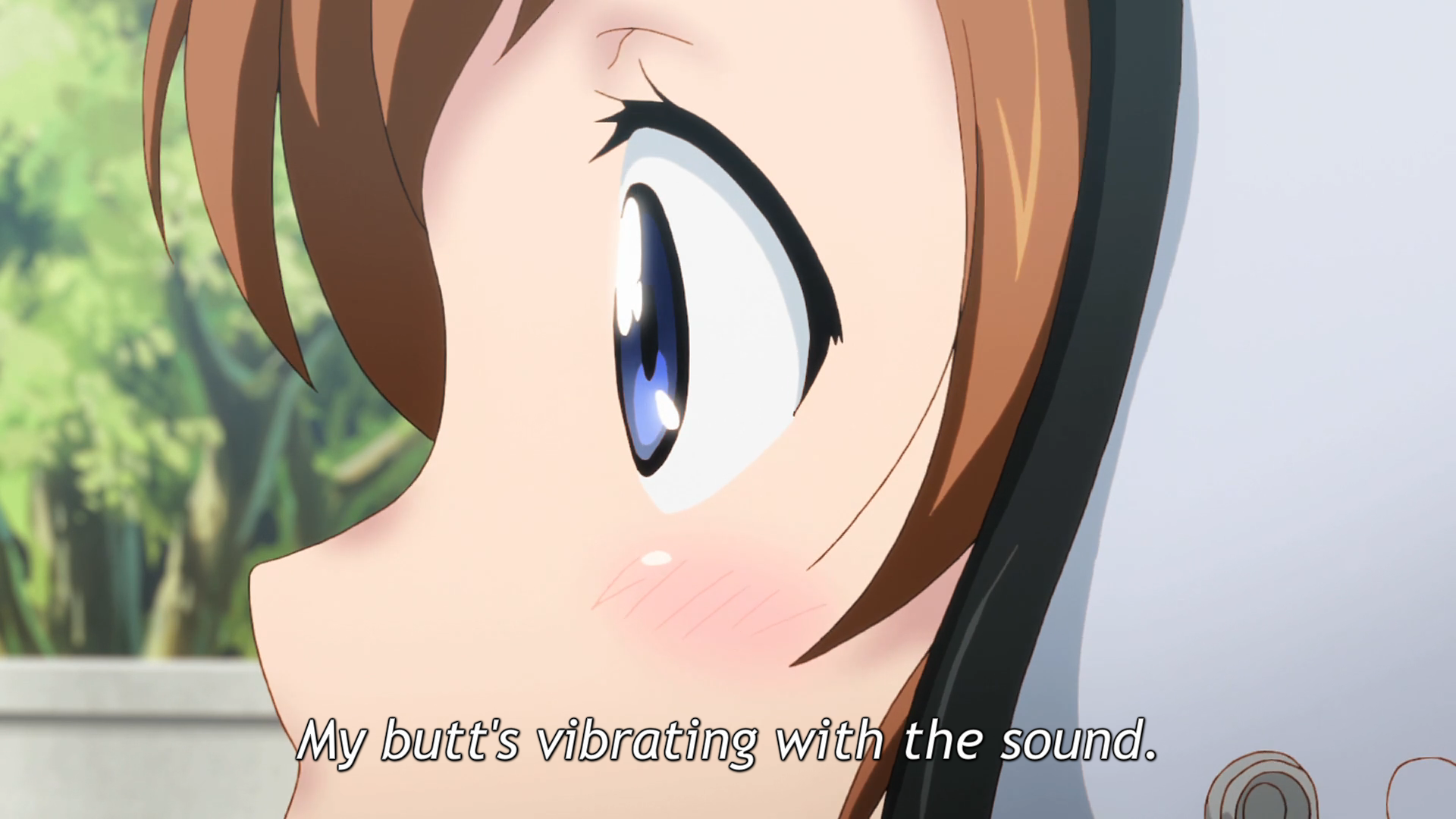 Right from the get-go, everything is copy-pasted from K-On!: the air-headed protagonist, the tomboyish girl (Onsa), the girl the tomboy teases (Rin), the rich girl (Hijiri), and the way these characters meet in the club. Later on, they get a new club member in their second year, Chisame Nakano, who shares the same last name and general personality of Azusa Nakano from K-On! Unfortunately, part of what made K-On! great was not to be found here: chemistry. Say what you will about K-On!, but those four girls, later five, made a good coherent unit. Granted, in Bakuon!!, they’re not working towards a common goal, but you can still have good character chemistry even without working together towards something. Also, by following in K-On!’s footsteps, they’ve invited comparisons and the same magic that made K-On! good was not present in Bakuon!! For the most part, Bakuon!! was never that good at any one time. There was even a point when I asked myself: “Why are you still watching this? This is terrible.” In addition, this anime should have an ecchi tag for all of the fanservice that happened throughout the anime at random times. Since the anime is about motorcycles, I feel like you had to be a motorcycle enthusiast yourself from the beginning to stick with it. However, there was one other reason I stuck with Bakuon!! through to the end…

Every single episode of Bakuon!! had something to look forward to: absolutely wacky plot points. The only thing that made this anime interesting at all, unless you are into motorcycles, was the random things that happened in each episode. Whether it was a sultry talking motorcycle that made comments like, “I’ve taken riders’ virginity”, to Hane meeting up with Jesus on several occasions, to Onsa contracting an unhealthy relationship with Suzuki motorcycles after licking Rin’s drool off her hand. Every episode had some kind of moment that made you wonder if the people who wrote the scenarios were on drugs. For that reason alone, I stuck with Bakuon!! through the whole season just to see what crazy thing would happen next. The issue with that was I was sitting through sixteen minutes per episode of drivel, for those eight minutes of glory.

As the anime went on, they developed the characters a bit which made the second half a little more enjoyable than the first half. It was either that, or I just got used to these characters. The anime as a whole will take time to grow on you, but the characters take a lot longer. There’s not a whole lot that’s special about these characters. In the end, one of my favourite characters was Raimu even though she never spoke a word. Raimu let her actions speak for her, and she was the cause of a lot of mystery throughout the series as a whole. She was the only character with a backstory, and a lot about her, and her past, was a mystery since she never said anything. As the anime went on, more about Raimu was revealed, and it only made you like her more. I suppose that was another reason why I continued with this anime; I wanted to learn more about Raimu and the lead-up to the answer was pretty good.

Bakuon!!‘s story (pacing) and characters are mediocre, with the exception of the absolutely random nature of the episode’s plot points, and Raimu’s story.

The art and animation isn’t anything too special. There is more detail placed into the motorcycles of course, and there is the nice-looking mid-episode art cards, but those are the only exceptions. The character art suffers a little bit as a result, and I’ve seen a lot better from other anime. Animation is better again during the times they’re on their motorcycles.

The opening (“FeelxAlive” by Sayaka Sasaki) and ending (“ぶぉん！ぶぉん！らいど・おん！” [Vroom! Vroom! Ride On!] ) songs are fast, upbeat songs that get you in the mood for watching an anime about motorcycles. They’re definitely the standout music pieces, as not much else really pops out at you. Perhaps during one of the episodes where they race, but that’s about it. The main characters are voiced by rookies, or voice actors that haven’t had too many main roles. The only exception is Rin, who was voiced by Nao Toyama (Chitoge from Nisekoi, Kongou from Kantai Collection). As with most of her roles, she nails her character pretty well. Unfortunately, nobody else really stood out.

Bakuon!! is fine if you’re a motorcycle lover since there aren’t too many anime out there that portray motorcycles in a positive light. If you’re watching it for any other reason, you’re probably better off skipping it. There’s not a lot here to really keep you interested, aside from those aforementioned scenarios, and there are a lot better slice of life anime you could be watching. I am still on the lookout for anime that can match K-On!‘s quality when it comes to cute girls doing cute things. Imitation is the greatest form of flattery. Unfortunately, Bakuon!! didn’t even come close to the magic of the anime it tried to copy.

+ OP and ED get you in the right mood

+ Raimu, and her story

– …but the rest of the episode is often uninteresting

– Poor rip-off of K-On!: every character in Bakuon!! doesn’t come close to being as good as their K-On! counterpart

Do you find this an accurate description of Bakuon!!? Let me know in the comments!