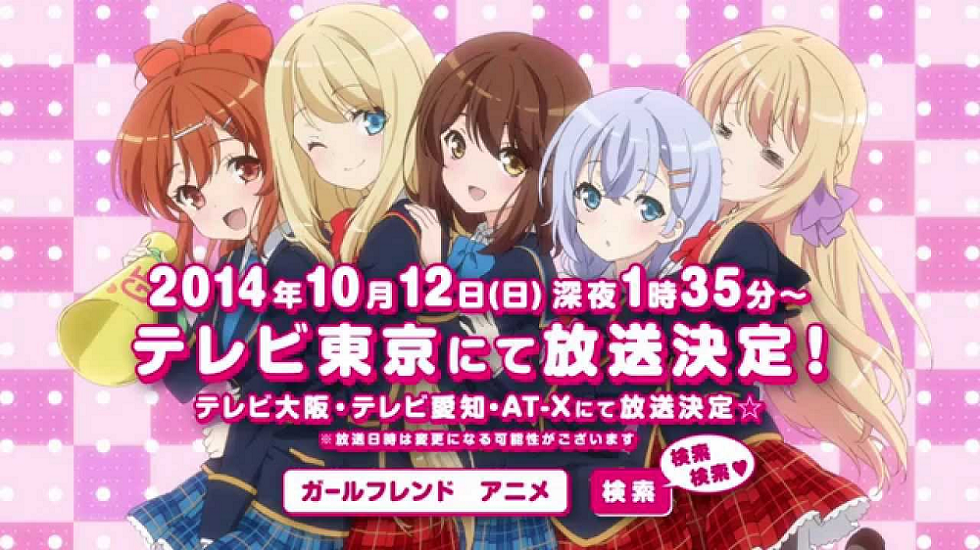 Why do you watch certain anime? Does the genre appeal to you? The story of the anime? The studio that made it? The reputation of the anime? Do your friends recommend one to you? There is usually a reason why you watch a certain anime. There are certain people, like me, who will watch a particular anime if certain voice actors are in it. It’s like watching a movie or TV show because an actor or actress you like is in it. Girlfriend (Kari) found itself on my to-watch list just from the voice actresses in it alone. This anime features a lot of characters, most of which are played by industry veterans. Satomi Sato (Wendy Marvell from Fairy Tail), Rina Satou (Mikoto Mikasa from Index and Railgun), Sakura Tange (Sakura Kinomoto from Cardcaptor Sakura), Mai Nakahara (Nagisa Furukawa from Clannad), Rie Kugimiya (Taiga Aisaka from Toradora, Shana from Shakugan no Shana), Ayana Taketatsu (Azusa Nakano from K-On!), Eri Kitamura (Sayaka Miki from Madoka Magica), Yui Horie (Minori Kushieda form Toradora, Tsubasa Hanekawa from Bakemonogatari)… I could go on for a while honestly, but these are just a few examples. With such a wealth of voice acting talent, Girlfriend (Kari)‘s got its voice acting down pat. So how does the rest of the anime do?

Being based off a mobile phone game where your objective is to pick out your girlfriends, naturally, Girlfriend (Kari) doesn’t have one over-arching story. There are way too many girls and not enough time. Each of Girlfriend (Kari)‘s episodes focuses on a particular set of girls as they solve their own problems. These stories are mostly unrelated to another group’s story, so it does feel a bit disjointed at times especially because of the massive cast. However, given the time they had and the number of characters, they did an admirable job making sure that all of the characters were properly introduced.

Since the story is pretty much non-existent, it’s up to the characters to carry the show. With a cast of characters that numbers over 50, I’m sure you’ll find one girl you like at one point or another. However, how much that girl appears on screen might disappoint you. There are five “main” girls: Kokomi Shiina, the main “protagonist”, Chloe Lemaire, the French transfer student, Erena Mochizuki, the camera obsessed girl, Fumio Murakami, the quiet library assistant, and Akane Sakurai, the school’s announcer. They appear as the main characters in the first two episodes and the last two episodes and sporadically throughout the other episodes. If you like these five, chances are you didn’t mind watching. If your favourite character was from the supporting cast, you may have only seen that girl for one or two episodes. Kokomi gets the most development out of all the characters, but it’s a small amount.

In fact, most of the supporting characters are forced to change something about themselves in order to get through their problems, but they usually revert back to their old selves in the next episode if they appear again. Personally my favourite character is Chloe because her misunderstanding of Japanese culture and language expressions makes up half the anime’s humour. She’s also an oddball to begin with, so she ends up standing out because of how different she is than all the other characters.

I don’t really have anything special to say about Girlfriend (Kari)‘s visuals and animation. Much of it is par for the course with no real big standout parts. Even the concert scene, which usually has higher than normal production values, remains the same as the rest of the anime. Silver Link has previously worked on anime like the Baka and Test series, Kokoro Connect, Non Non Biyori, and the Fate/kaleid liner Prisma Illya series. So they are capable of making a good looking anime, it’s a shame that more work wasn’t put into this one. There’s also something off-putting about the characters’ design. Their breast sizes really stand out even if they’re not that big. It was something that really bothered me at the start, but I kind of got used to it over time.

Girlfriend (Kari)’s soundtrack again doesn’t stand out either. The OP, 楽しきトキメキ (Tanoshiki Tokimeki), is an upbeat song sung by the girls from the school band Neuron Creamsoft (Saori Hayami is the main vocalist). The ED, はれるかなぁ (Hareru Kana~) is sung by Kokomi Shiina (Satomi Satou). These are perhaps the only two real standout songs. Now, I don’t think I have to go to much into the voice acting talent. I established it back in the introduction. The voice actresses that are involved in this anime is the main draw of it. The vast majority of them have played a major role in one anime or another and if they weren’t a main role, they were in a famous anime in a supporting role.

Just like watching a movie or TV show for an actor or actress you like, this is a show you watch for that one, or two, or three, or more voice actresses that you like. The rest of the anime is painfully average and not much different than what you would find in any other school/slice of life anime. As such, it’s hard to recommend to anyone that doesn’t have an appreciation for the top-tier voice acting talent involved. For those that do have an appreciation for voice acting in their anime, then you might like what is presented here. 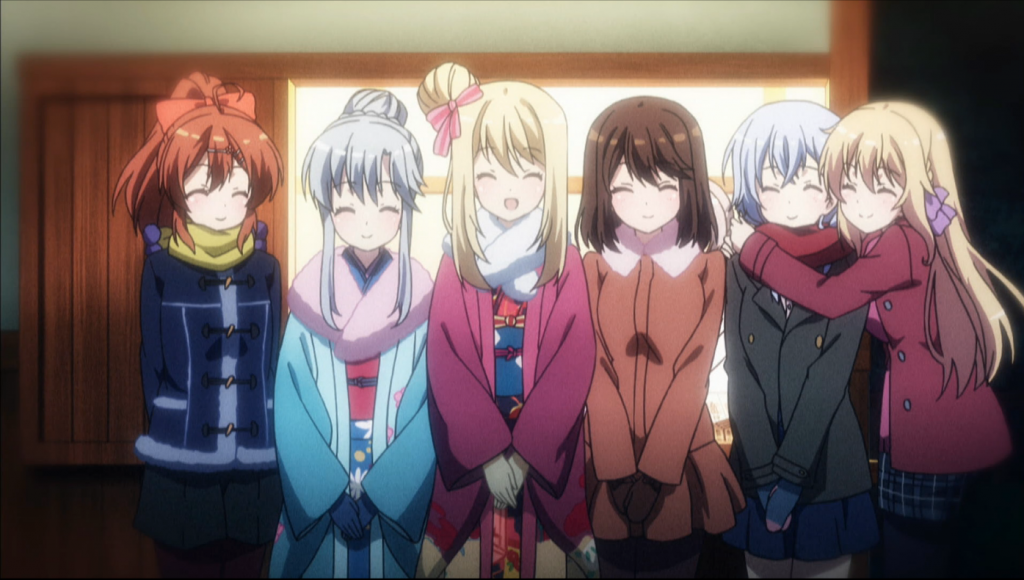 + Veteran voice actresses play the vast majority of the characters

+/- Does a good job introducing every character, but not enough time to get to know any of them aside from the main characters

– So plain that it doesn’t stand out at all

Did any of you watch Girlfriend (Kari)? If you did, let me know what you thought of it in the comments!