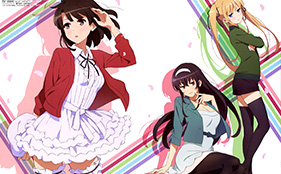 Fuji TV revealed during a livestream event on Thursday that the anime sequel adapting Fumiaki Maruto’s popular comedy light novel series Saenai Heroine no Sodatekata is slated to premiere on its Noitamina programming block in April 2017.