The membership includes: a membership card using the image from the past Nakayosi magazine, a member-limited makeup gloss, advance sales of the tickets for the Sailor Moon musical, newsletters, member-only merchandise, and member-only contents of its official app. More information about the membership fees will be released later. 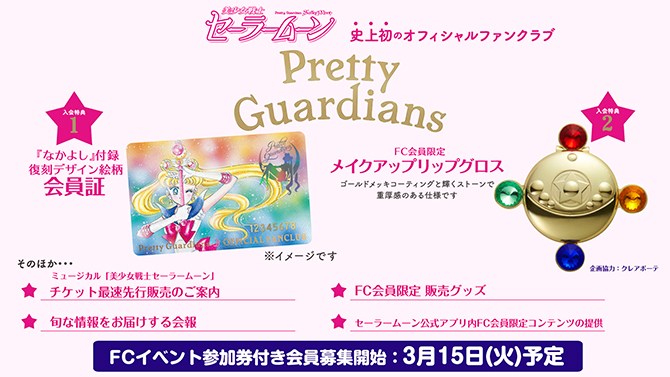 Commemorating the launch of this fan club, a member-only event will be held at Tokyo Metropolitan Gymnasium at 15:00 on April 10. The Usagi Tsukino/Sailor Moon voice actress Kotono Mitsuishi, Mamoru Chiba/Tuxedo Kamen voice actor (in Sailor Moon Crystal) Kenji Nojima, astute singer Mitsuko Horie, and the Sailor Moon Crystal theme song artist Momoiro Clover Z are scheduled to attend. To participate in this event you must register for the fan club by March 31.