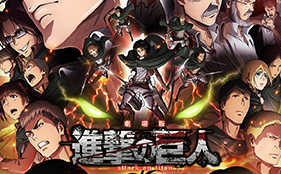 The official website for the second Attack on Titan film, Shingeki no Kyojin Movie 2: Jiyuu no Tsubasa / Attack on Titan: Wings of Freedom, has revealed that the film will receive a “4D experience” in theaters in Japan this summer. In the 4D version of the film, theatergoers will see movement all around their seats, not just on the screen. Effects such as wind, water, and flashes will operate in accordance with the film. The first compilation film also had 4D screenings.

The movie will feature new audio with a 5.1 surround sound remaster, and a complete redubbing with the same cast members. Here’s the most recent promo video: