D3 Publisher has released a debut trailer for SG/ZH School Girl/Zombie Hunter, its upcoming action shooting game for the PlayStation 4, developed by Tamsoft.

The game is set in the world of Onechanbara and sees a group of high school girls trapped in their school during a zombie outbreak.

SG/ZH School Girl/Zombie Hunter will launch for PlayStation 4 in Japan on January 12 for 6,980 yen.

Set in the prestigious Musaku High School, accomplished in both the literary and military arts, SG/ZH School Girl/Zombie Hunter is a survival story on a campus isolated from the outside world and surrounded by zombies after a sudden epidemic. The game shares the same world as the Onechanbara series, however this game is a panic shooting action game staring five school girl survivors.

Evade, repel, survive, and escape the hordes of zombies on school grounds. There are episodes that serves as the backbone of each of the characters. Defeat zombies while overcoming obstacles and cooperatively combining forces.

A girl who comes from an honorable samurai family. She likes both hero things and robot anime-a result of the samurai code of chivalry driven into her since a very young age. She has a cheerful personality and hates dishonest behavior. She sometimes collides with those around her due to her clumsy nature, but is strangely able to become friends. She’s the type to keep a promise no matter what it takes. She worries for Risa, who had an unfortunate experience during her childhood, and treats her like her younger sister. She has a strong desire to protect others and tends to act without thinking, getting caught up in her surroundings. Despite being at the mercy of Sayuri’s behavior, the other four survivors find the strength to continue fighting the zombies. Akiha’s grandfather is the famous martial arts master, Gengoroumaru Akiha. 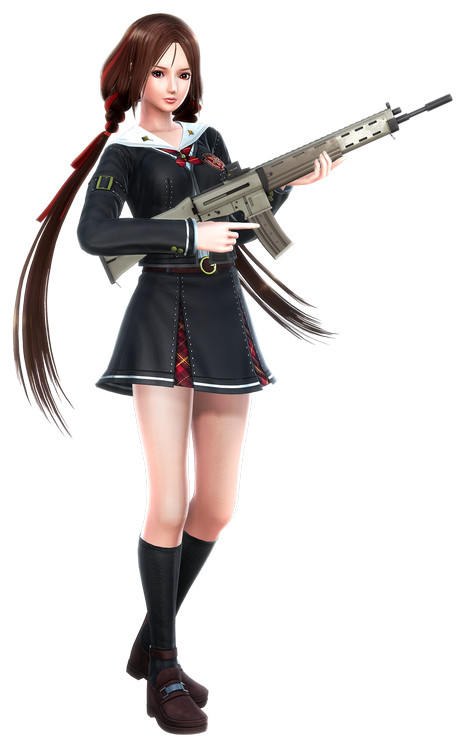 Having lost her parents and older brother at a young age, she has been fighting a constant battle not only against zombies but also against loneliness and the fear of death. She was taken in by Sayuri’s family, who was close friends with her father, and was taught from a young age to wield the long sword as part of her spiritual training. She is a bit of a coward in battle and relies heavily on Akiha. She has the ability to fight, but is still afraid. Because she requires the support of others she has a dependent constitution and is unable to make her own decisions.

A close friend of Enami Kamijo. Outside of cute things, she likes mysterious things like fortune-telling and the occult. She’s the type to often fade out of her surroundings and focus only on the thing that interests her-petting a paralyzed puppy in the middle of the road, for example, leaving herself likely to be hit by a car. Mayaya is Enami’s childhood friend who causes trouble for her and cannot be ignored. The two will often take action together, and Mayaya also acts as the mediator for the lonely Enami and her schoolmates. 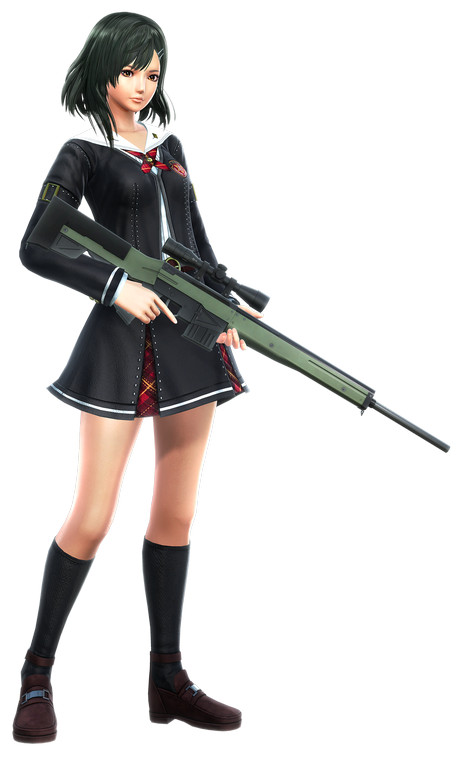 She speaks and conducts herself like a man and is the oldest out of the five survivors. As the clear-headed athlete, she is an asset to those around her, although she keeps up a secret effort, continuing to fight on despite the difficult circumstances. If someone is inferior to her, she thinks that they’re not making a great enough effort, and she is often misunderstood as a cold genius. When someone comes to her for advice she pushes them away by saying things like, “just do your best.” She and Mayaya are childhood friends since their parents know each other. 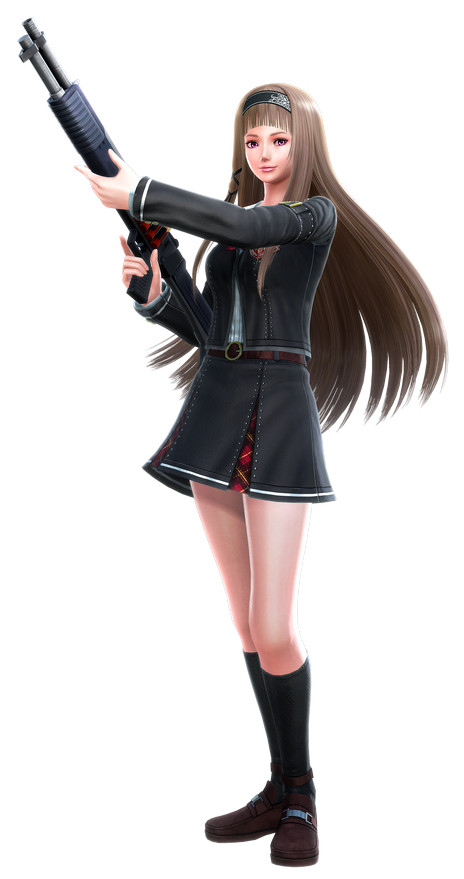 An idol since middle school, but she has suspended her idol activities to concentrate on her schoolwork. Her entertainment office sells her as an innocent, princess idol, but in reality she is an abnormal girl who loves disputes and bloody topics. A young actress tried to force Rei, who is known as her role as the lunatic heroine in a B-grade horror movie, to retire. When she suddenly went missing it seemed like Rei’s true character would be revealed through entertainment world gossip, so she suspended her idol activities to let things cool off. Her mother is also a former actress. She dreams of surpassing her mother one day. 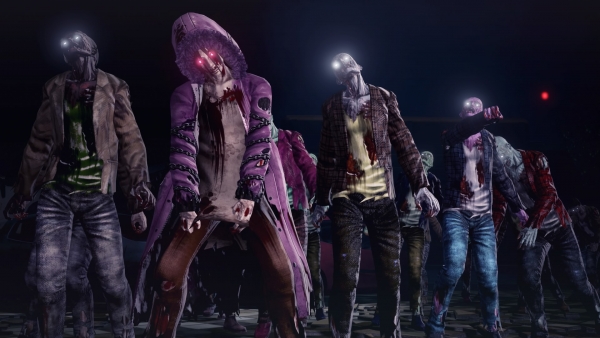 An unidentified man with some sort of connection within the ZPF. What is the true purpose of his springing forth zombies into Kirisaku High School? Perhaps there is some sort of mystery hidden within the school. He creates and controls new zombies as if repeating an experiment.

The guns specialist that appeared in the Onechanbara series, which shares the same world with this title. She belongs to a zombie punitive force called the ZPF and is acquainted with the five survivors of Kirisaku High School after answering their distress call. In trying to save them, she’ll deliver the girls weapons and relief supplies using drones. In SG/ZH School Girl/Zombie Hunter, Anna only appears as your means of communication with the ZPF. 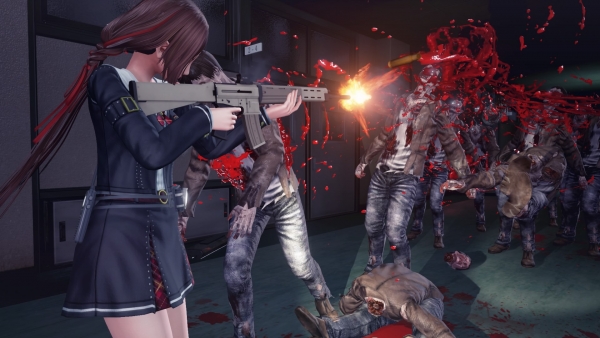 SG/ZH School Girl/Zombie Hunter uses a mission-based system to progress through the game. There are 50 missions in total. Various types of firearms will appear, including handguns, assault rifles, sniper rifles, shotguns, sub machine guns, and rocket launchers. Controlling the five girls, players will take on a variety of challenging missions to fight and survive. Zombie hunting battles will unfold all over the isolated school, including the schoolyard and the gym. 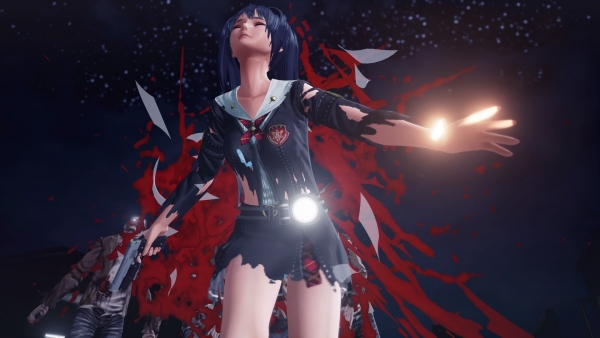 Similar to Senran Kagura, there is a clothes ripping system, in which the more you get attacked, the more your clothes will rip. The areas that take more damage will have less clothing. One of the traits of this game’s zombies is that it appears as though they’re targeting your clothes… But if you’re stripped completely you can still continue to fight. 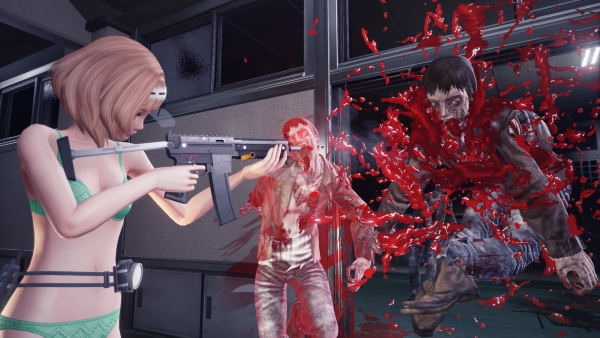 The girls realize that the zombies seem to be after their clothes, so they begin to undress and use their clothing as a decoy.