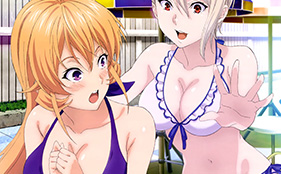 Amazon Japan have revealed that Yuuto Tsukuda and Shun Saeki’s Shokugeki no Souma (Food Wars: Shokugeki no Soma) manga will include OVAs in volume 18 and 19. Volume 18 will bundle the Jump Festa 2015 special. Both volumes will be released on May 2 and July 4 respectively.

In addition to this, the anime’s second season was previously announced in the most recent issue of Shueisha’s Weekly Shonen Jump magazine. Here’s the promotional video for the second season:

In addition to this, a new visual was recently revealed.

The anime’s second season was previously announced in the most recent issue of Shueisha’s Weekly Shonen Jump magazine.