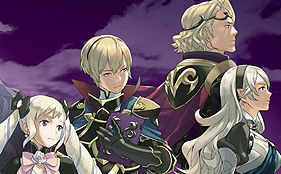 Earlier last January, we reported that Nintendo had confirmed that the upcoming title in their flagship strategy-RPG series, Fire Emblem Fates, would have content cut from the Western release. Courtesy of Polygon’s own Nick Robinson, we now know that the intimate moments you can share with your party members are still present.

However, publisher Nintendo has kept their word and have, thus, removed the actual “petting” feature which would’ve involved players rubbing the companion of your choosing with the stylus. This follows reports that all versions of Fire Emblem Fates will be English language only, though Nintendo was reluctant on elaborating why or whether or not we’d see the Japanese voice-track added as DLC in the future.

It was to be expected that those who made the discovery continued to be headstrong in the idea that cut content still detracted from their decision to buy Fire Emblem Fates, though one viewer was quick to say that the “petting” could’ve ended up being a monotonous, tedious chore. Given Nintendo’s vague statement on whether or not we’d see ‘Skinship’ at all in the Western release, it’s a pleasant surprise to see that, at the very least, half of the experience remains intact.

On a related note, Nintendo has released a trailer for Fire Emblem Fates: Revelation – a third path, where the protagonist decides to remain neutral – and Map Pack 1 which will add an additional 11 maps after reaching past Chapter 6 in either Fates: Birthright or Fates: Conquest. Nintendo plans to release both DLC packs on March 10th at a discounted price of US$19.99 for Fates: Revelation and US$17.99 for those who purchase the game. For more information on how to purchase, install, and access the DLC when it launches, check out the official site.

Fire Emblem Fates: Birthright and Fire Emblem Fates: Conquest will release for the Nintendo 3DS on February 19th in North America. If you’ve got an itch for some expansive, challenging stategy and a little “waifu-simulator” to spice things up, you can pre-order the game on Amazon using our Haruhichan affiliate link!