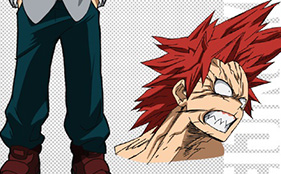 The official website of the upcoming anime adaptation of Kouhei Horikoshi’s Boku no Hero Academia (My Hero Academia) manga has revealed the character designs for characters Denki Kaminari and Eijirou Kirishima. This year’s 10th issue of Shueisha’s Weekly Shonen Jump magazine announced the voice cast for the two characters on Monday.