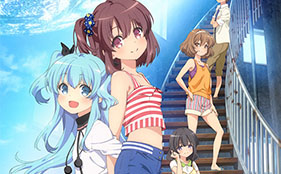 The official website of the Sora no Method anime has released the third promotional video. The anime will be airing this October during the Fall/Autumn 2014 anime season.

Sora no Method synopsis from Haruhichan:

The story begins one winter day when the wish of a few girls was realized with a miracle, changing the landscape of a town. “In the skies above this town, a disc is always there.”