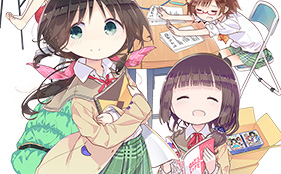 The official website for the upcoming anime adaptation of the 4-koma manga Stella no Mahou (Magic of Stella) has launched and has revealed a new visual. The March 2016 issue of Manga Time Kirara Max (Kin-iro Mosaic, Gochuumon wa Usagi Desu ka?), which will go on sale on January 19, announced that the 4-koma manga Stella no Mahou (Magic of Stella) will be getting a TV anime adaptation on Sunday. The series is about a new high school student named Tamaki Honda who decides to join a doujin game development circle. The series is drawn by cloba.U and began serialization in 2012. It currently has two volumes in print with the third volume to go on sale on January 27.

Stella no Mahou synopsis from MAL: