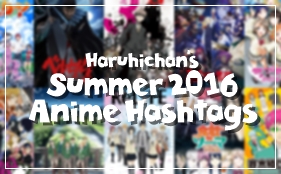 It is finally the Summer season and a lot of exciting shows are here to ease our vacation boredom! Haruhichan seasonally provides a list of hashtags, official Twitter accounts and sites for your usage in case you go ranting, rambling (and fangirl/boying) on Twitter or other social networking sites. These resources will be helpful for sharing and attaining information about these shows. Also, if you would not want to get spoiled from a certain show, muting a hashtag is a piece of cake. (To know how to mute a hashtag, click here.)

Here is a list of the official anime hashtags, official Twitter accounts and websites that I have compiled from long-running shows, Spring 2016 leftovers and this Summer 2016 season:

And there you have it! So many continuing and new shows this Summer!