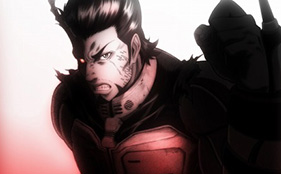 The first promotional video has been uploaded for the TV anime adaptation of Yu Sasuga and Kenichi Tachibana’s manga Terra Formars. The anime series will be animated by LIDENFILMS and is set to on September 27 which falls under the Fall/Autumn 2014 anime season.

A teaser video for the anime released back in March:

The revealed cast is as follows:

The production crew for the anime was announced earlier and is the same for both the OVA and TV series.