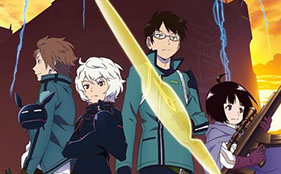 With the debut just 10 days away, a new 60-second extended preview video has been revealed for the TV anime adaptation of Daisuke Ashihara’s Sci-Fi World Trigger manga. The anime series will be produced by Toei Animation and is set to air this October 5 which falls under the Fall/Autumn 2014 anime season.

The anime opening theme will be titled “GIRIGIRI” and performed by Sonar Pocket.