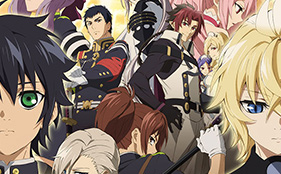 Universal Studios Japan’s YouTube channel began streaming an English subtitled trailer for the upcoming second season anime adaptation of Takaya Kagami’s dark fantasy manga Owari no Seraph (Seraph of the End). The new trailer previews the anime’s opening song, “Two souls -toward the truth-” by fripSide, and the video features some of the action that will be revealed as Seraph of the End: Battle in Nagoya continues the ongoing war between the humans and the vampires.

It was also revealed that the ending theme song “Orion” will be performed by Nagi Yanagi and the anime will premiere on October 10 at 10:00 p.m. on Tokyo MX. The following channels will also air the anime:

A new visual for the second season was also recently revealed: