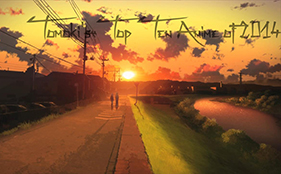 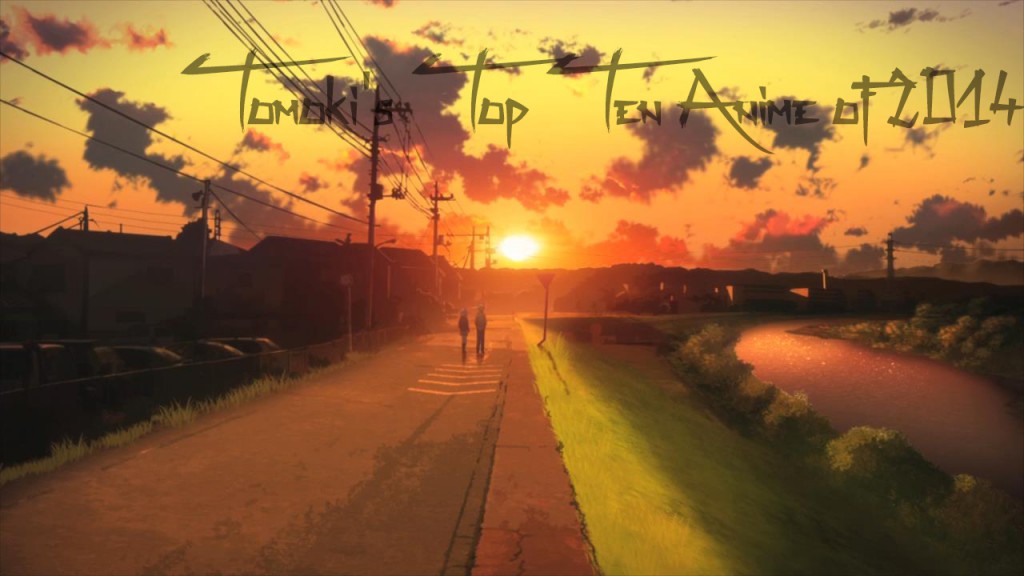 In what has been another eventful year for anime, we have seen both ends of the spectrum; both disappointments and pleasant surprises. From comedies to action-packed thrillers, 2014 has done us the justice of giving us a broad array of shows to admire and/or nitpick over. But which of these shows were my personal favorites? Well, let us take a look in the list!

It should be mentioned however that the list is that of personal preferences among the shows I have seen. Those I have missed simply wouldn’t be present. For those which are not listed but deserve a spot, feel free to mention them in the comments. Without further ado, Tomoki’s top 10 anime of 2014! 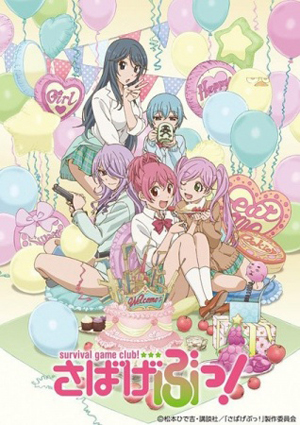 Do not be fooled by its cutesy art style and entirely female cast – being based on a shoujo manga, one can expect Sabagebu! to be nothing more than your generic slice of life comedy with cute girls doing cute things. There is certainly more to it than that! This summer entry was one of the more surprisingly good shows of the year. Its story circles around a new student named Momoka Sonokawa who recently transferred to a highschool in which she is immediately recruited into the school’s “survival games club” – (against her will, might I add). A survival games club is something like a paintball club.

There is not much in the way of story beyond this, as the show drives you through a series of skits involving over the top (yet imaginary) gun violence as the students partake in various survival game scenarios. The show caters to gun otakus primarily and is a fun watch. There is little to no redeeming value in the show, but that’s okay. Being a fan of the type of humor in the “action” scenes, I thoroughly enjoyed the show. It works as a great filler between more serious shows. 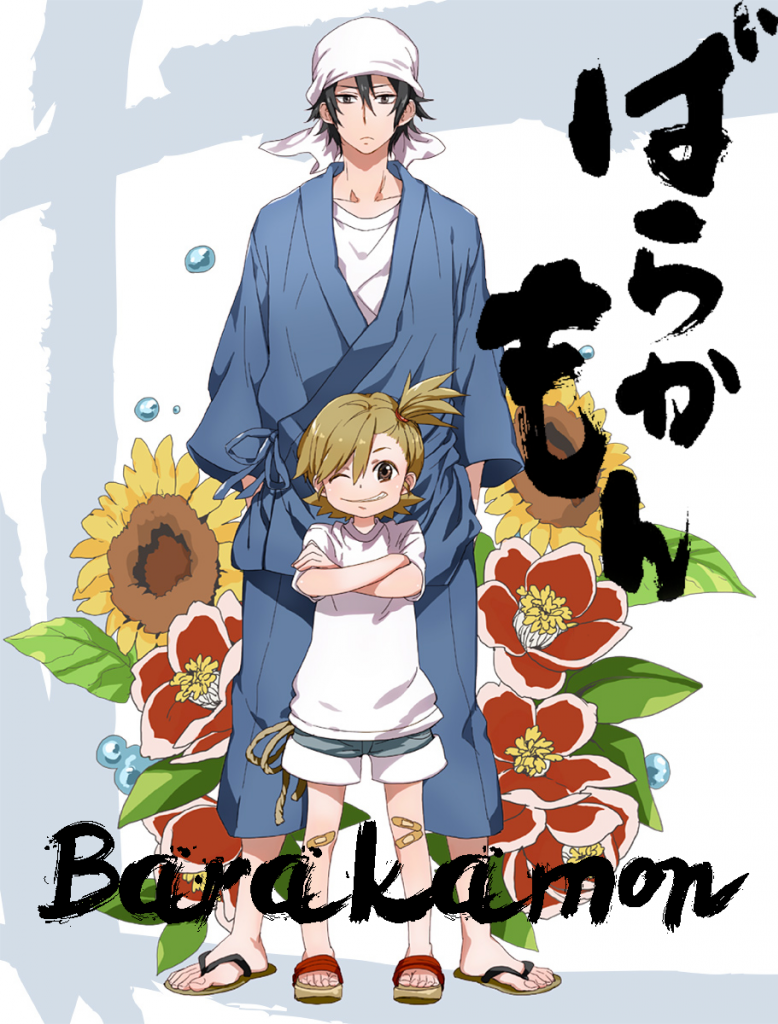 Being one of the more popular shows of the year, many would have at least heard of Barakamon already. It focuses on the story of calligrapher Seishuu Handa – a hot headed young man who is sent to a rural town in an island to cool down work on his art in peace. Being a city boy, he is unused to the closeness and hospitality of small town folk and through the course of the show he softens, befriends one of the local youngsters, and comes to terms with his inner turmoil – discovering not only a new meaning in his work, but also discovering himself. The show balances comedy and emotional development and drama fairly well – and is a fun-filled yet heart warming adventure.

Being a summer entry, it had many shows to compete with, yet it held its own and overall deserves a spot on the list of my favorite shows of the year. 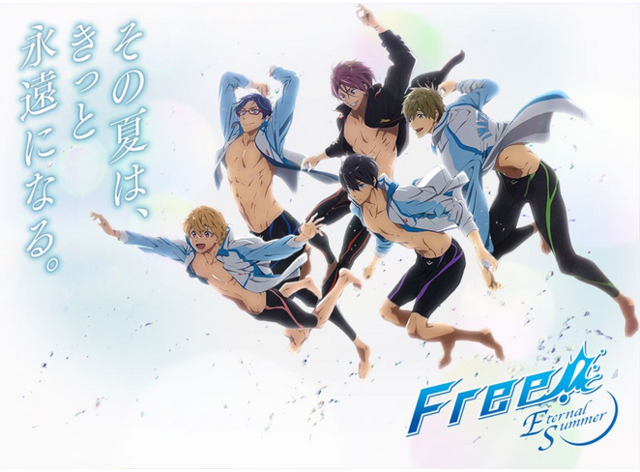 Will there ever be a list Tomoki makes in which Free! isn’t mentioned? The answer is yes. He would never add it into a list of disappointments. This here is a show we can all get behind (pardon the pun). It is absolutely marvellous, and it certainly manages to explore new waters in terms of anime. Alright, that’s enough homoerotic swimming related puns for the year. Let’s get serious.

Yet another anime that aired during the summer (and rightly so, considering the name) Free! Eternal Summer is the second season of the popular sports anime. Interesting how it’s called a sports anime when the primary cast are sporting next to nothing. (Dammit, I promised myself that would be the last pun.) In any case, the storyline continues where it left off, and we are thrust right back into the teen angst and drama of being in a high school swimming club. The show depicts character development, the spirit of sports and competition, the values that come with friendship, and it does all this with excellent animation – particularly the water animation during race scenes.

Despite the connotations that come with it, Free! is in fact a great sports anime and all jokes aside, I recommend it to anyone who is a fan of the genre. 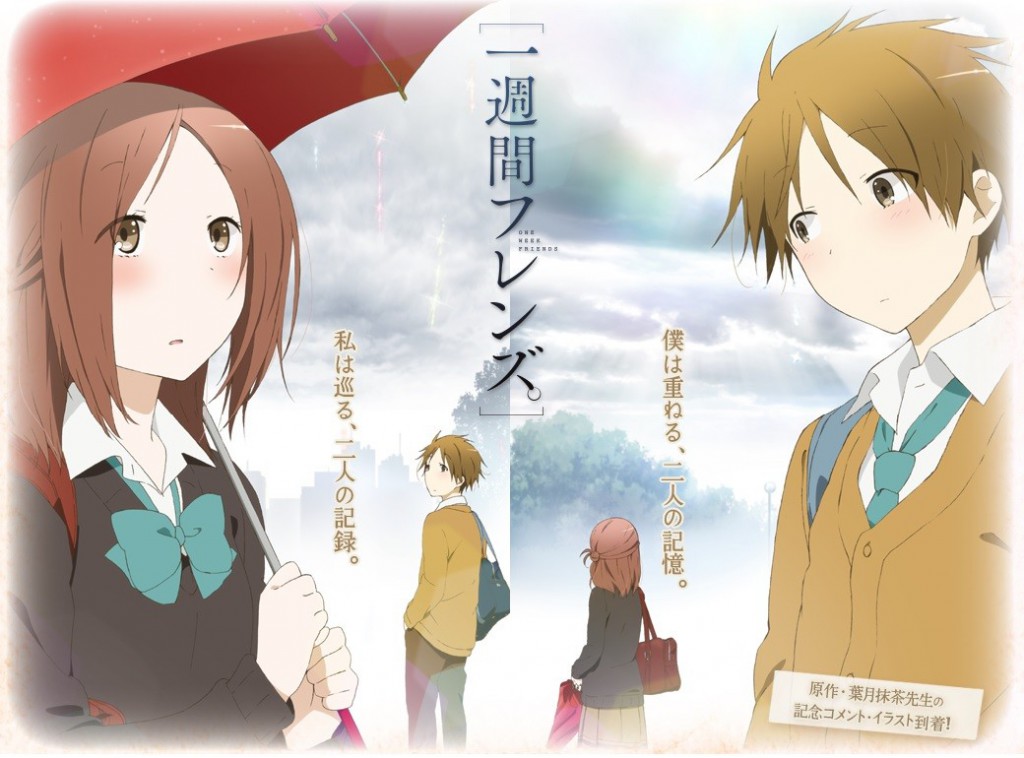 Never before had a show made me tear up in the very first episode – and it only ever happened once after. While I’m not sure how this fits the shonen demographic rather than shoujo – Isshukan Friends (also known as One Week Friends) is another one of the surprisingly enjoyable shows of the year. The story revolves around Hase Yuuki, a fairly average (yet very caring) highschool boy who notices the quiet, pretty, intelligent yet lonely Kaori Fujimiya in his class. While she is off-standish at first, he discovers the reason behind her behaviour and the two slowly grow close.

A slow paced and beautifully animated show that released during the spring season that I would recommend to fans of slice of life or drama anime. While the show may disappoint those who wish for a concrete conclusion, the manga extends beyond the anime and there is yet hope for a second season! 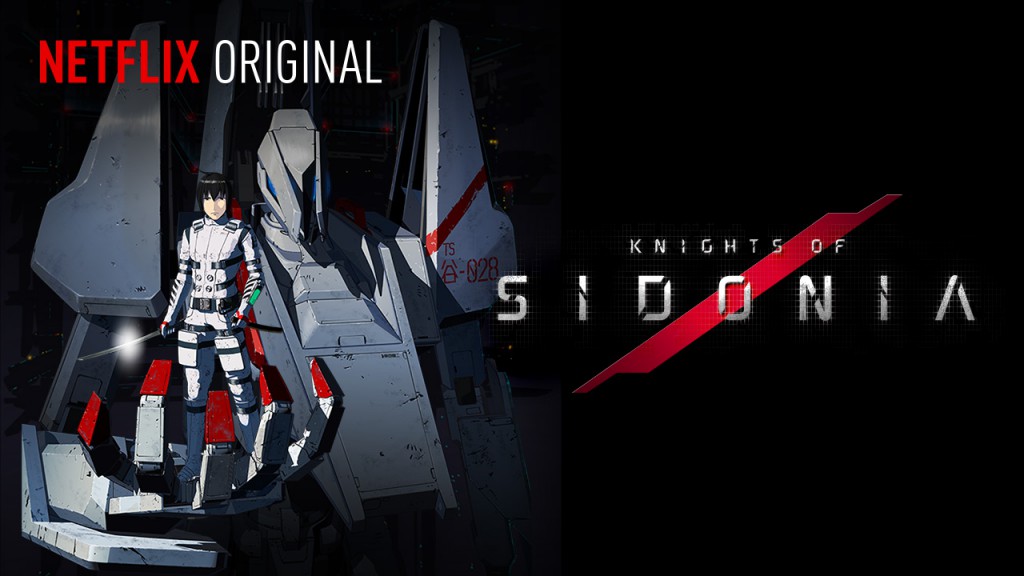 What some refer to as “that Netflix anime” or others refer to as “Attack On Titan in space”, Knights of Sidonia (also known as Sidonia no Kishi) should certainly not be reduced to such a basal degree. Knights of Sidonia boasts a dark, unique sci-fi world, teeming with lore in terms of alien threats, synthetic beings, an interesting conspiracy and a varied cast of characters.

Its most jarring quality however is easily its animation style. The show is almost entirely CGI, and uses an animation style that can be compared with the cel-shading seen in several video games. While this may be a deterrent for some, it greatly adds to the show’s futuristic yet foreign and unfamiliar atmosphere – something it manages well. Thrilling, interesting, and gory – the show is going to please sci-fi fans for sure. A second season is also in the works! 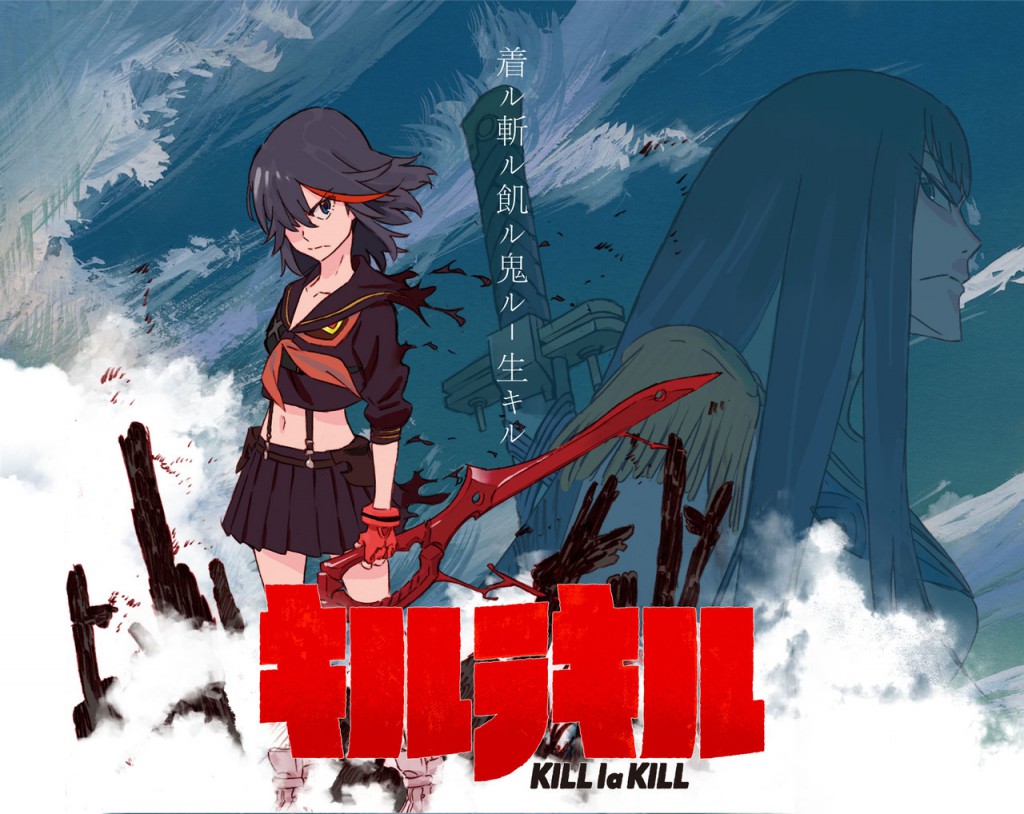 Alright, there may be a little cheating involved by including this one but it can be justified. While Kill La Kill began in 2013, it didn’t finish until early 2014. As it wasn’t in any list last year, it only felt right to have it be a nominee in this year’s list. Furthermore, its OVA released this year, so technically we’re good on all fronts. But about the show itself.

In the anime community, everyone and their mother has heard of Kill La Kill. (I’m sorry for that horrible, horrible pun.) It sounds like a classic revenge story with tons of gratuitous nudity and violence. While the nudity and violence remains gratuitous for the most part, the show was helmed by the same creators as Gurren Lagann, and it contains a far deeper message than just what can be seen on the surface. It is an intensely emotional tale, and some speculate that the show is in fact a metaphor for female adolescence and coming of age. Of course others argue that the only thing deep about the show is the cleavage.

While this cannot be discussed in depth without adding spoilers, it is safe to say that Kill La Kill was one of the most popular series’ in recent years and it deserved a spot on the list because I certainly enjoyed it. 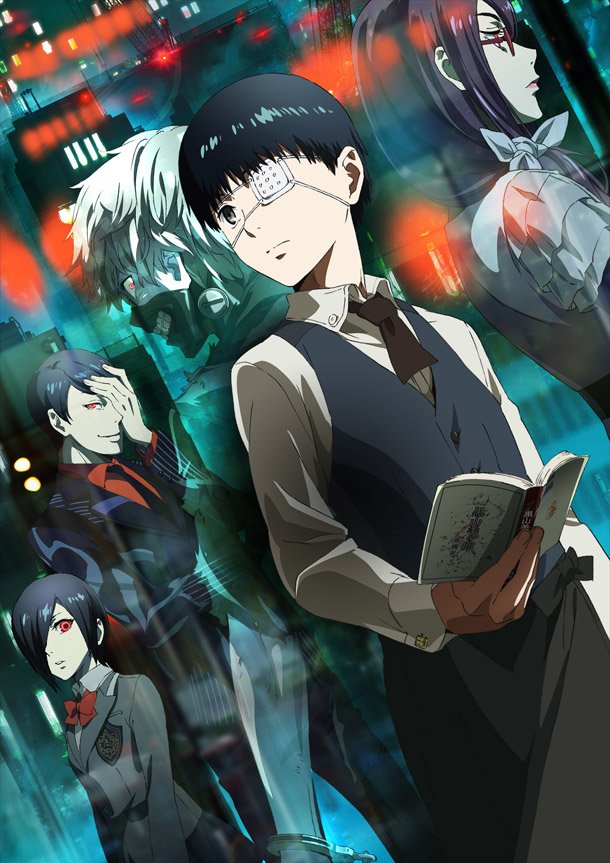 It cannot be expressed enough how much I wanted this to be at the top of my list. Remember back when I said only one other show had made me tear up in the first episode? This is that other show. The amazing soundtrack, the masterful voice acting work, the brutal yet still tasteful gore (I swear, these puns are going to get chewed out… See what I did there?)

If one can stomach the gore, I recommend Tokyo Ghoul to fans of thrillers. It certainly has its flaws, as I’ve addressed in its very own review, but overall this was a thoroughly enjoyable watch and has gained a sizeable fan following over the course of its summer airing. Plenty of Ken Kaneki cosplayers can be expected at the next few anime conventions! And the flame will be fuelled for some time as another season is coming soon! 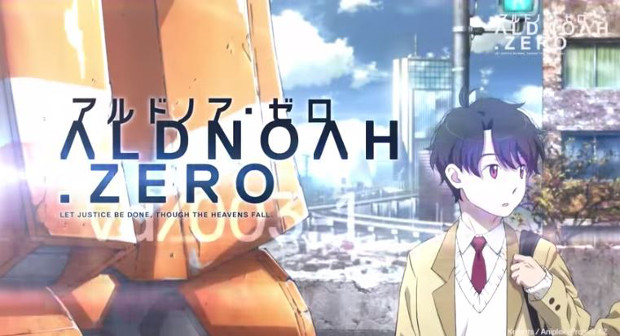 Aldnoah.Zero is the kind of show you’ll either love or hate. Fortunately there are many more who love it rather than hate. Taking place in the not-too-distant future, the world has reached a treaty with a superior, alien race, however the treaty is broken and an all out war breaks out. With an interesting slew of characters and deeply dramatic political intrigue, Aldnoah.Zero was one of the shows I deemed were ones to look out for back when its first episode aired during the summer season and it did not disappoint.

It is with heavy heart I place it at third, as this too is one I would have deemed my favorite show of the year, however its main gripe for me was the incredibly unlikeable protagonist. Although I personally loved it, the ending of the first season was thought to be controversial as well. Its next season is coming soon however! 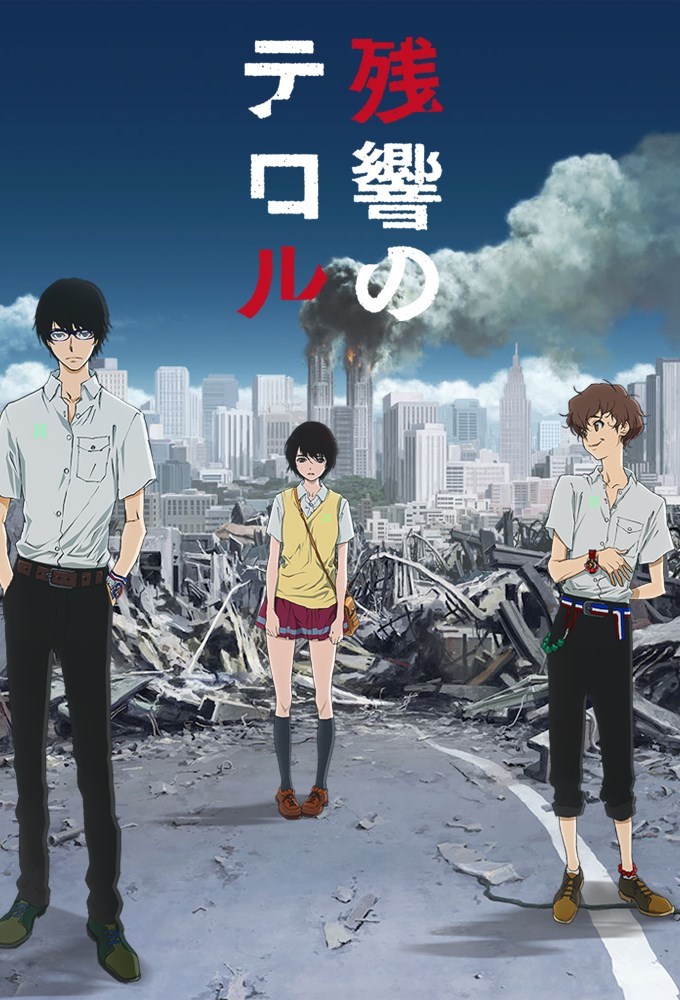 Brought to us by the same creators as Samurai Champloo and Cowboy Bepop, there comes the story of young terrorists Nine and Twelve in the anime Zankyou no Terror (also known as Terror in Resonance). In what I consider to be one of the more mature and serious shows, this psychological thriller takes its viewers for quite the ride. The non-linear story features short flashback sequences that slowly unveil the protagonists’ dark past and motivations for their terrorist activities.

The poster itself is controversial and the show is intense – I personally had to marathon it as I could not stop once I began. Its eleven episode summer span kept viewers on the edge of their seats throughout the duration and the bittersweet ending evoked the kinds emotions I did not think the show would. Easily one of my favorite shows of the year, despite how dark it is. 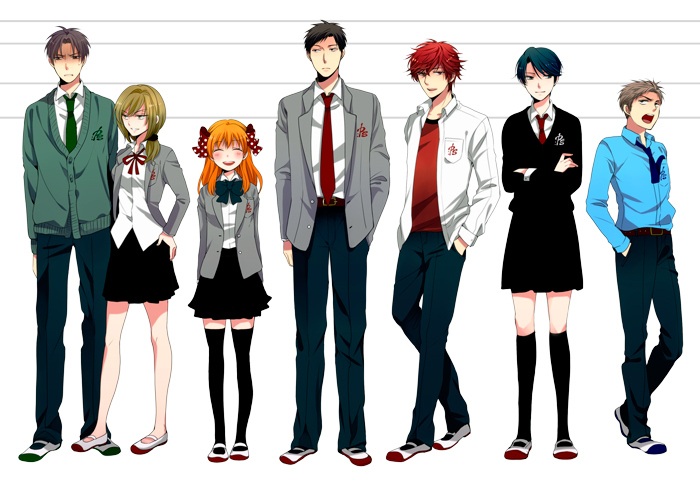 In terms of enjoyment there was one anime that I enjoyed beyond all others. For reasons both simple as well as personal, this was the show I had the best time watching – this is in part because of the company in which I was but also because the show is genuinely fun.

The story revolves around Chiyo Sakura, a young higschool girl smitten by the tall, stoic Nozaki Umetarou. In her efforts to confess to him, she somehow winds up as his assistant, as it is revealed he is the author of a piece in a monthly shoujo manga. With their friends tied into the mix, the group go through a multitude of misadventures, each character unique and funny in their own way – the dynamics all being amusing, with scenarios that are both engaging as well as ridiculous.

Fans of heavy romance may not like the lack of drama in the show but the “shipping” is certainly there, and watching your favorite pair interact is an absolute joy. Overall, Gekkan Shoujo Nozaki-kun (Monthly Girl’s Nozaki-kun) is an entertaining and lively experience – and that is exactly what anime should be. For this reason, it is my favorite anime of the year 2014.

Well, that just about wraps up my list for the top ten anime of 2014. Without a doubt there were shows I missed, but these were the ones I liked among the ones I watched – as stated in the introduction. So, what were your favorite shows of the year 2014? Agree with Tomoki? Or think he has horrible taste? In either case, let us know in the comments section below! Here’s to another year of being glorious weeaboos, happy new year!