The Hyperdimension Neptunia series of video games is a personal favourite of mine. I will properly introduce you guys to the series when I finish my review of HyperDimension Neptunia Re;Birth1. In the meantime, let me formally begin this article. Or, if you want, you can read up on the series here.

Note: The English titles in brackets are my translations of the titles. They may change if these games are localized for the West.

Last month, the developer of the series, Compile Heart, revealed that they were making two more games. One would be a spin-off game, and the other would be a continuation in the main storyline. Today, new details were revealed about the two games. The spin-off game is titled 「超次元アクションネプテューヌU」(Hyperdimension Action Neptune U). Despite what the ‘U’ suggests, it is not a game for the Wii U, but it will be for the Playstation Vita. The developer of the game is Tamsoft, who are the developers behind the Senran Kagura franchise of video games, and they also developed the idol management spin-off game Hyperdimension Neptunia Producing Perfection (due for release in North America on June 4, 2014). Not much is known about this game right now, but a release date of August 28 was given. The only gameplay details that was shared was that all four of the main characters will be in it, and a detail that one would expect from the creators of Senran Kagura: There will be stripping as the girls take damage. Prepare for the fanservice. 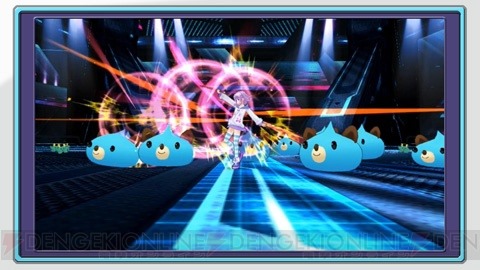 The other game is one that seems to take the series in a different direction. Up until now, the series has been fairly light-hearted in tone, even in the most dangerous situations. The first trailer that they have shown has a darker feel to it than the series has ever had before. This is 「新次元ゲイム ネプテューヌVⅡ」(Newdimension Neptune Victory II). Again, not a whole lot is known about this game aside from the trailer and a few images. One can assume it will retain the same tactical, turn-based style of the previous games. As for the characters only Neptune, the titular character, has been revealed along with one new character who appears to be based off the Sega Dreamcast.

I am a hardcore Hyperdimension Neptunia fan. If you are a fan as well, I would love to hear your thoughts about these two games from you in the comments below.