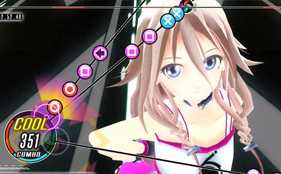 A new trailer for the new Vocaloid rhythm PS Vita game “IA/VT -Colorful-” has been streamed on YouTube by Marvelous AQL.

The upcoming rhythm game is based on Vocaloid’s IA Project, and it is slated for release in Japan on June 25th.

Here are some of the in-game screenshots:

In this rhythm game, the player has to move the analog stick of the console in circles while pressing buttons at the same time the musical notes appear, as the player progress through the track, the game stage gradually becomes more and more colorful. The game will feature different game modes such as challenge modes, consecutive play and free play.

Downloadable content support will also be present upon release.

Here are some of the songs that will be featured in the game: