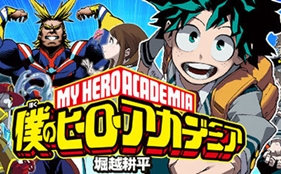 According to this week’s issue of Viz Media’s Weekly Shounen Jump digital magazine, they will be serializing Kouhei Hirikoshi’s (Sensei no Bulge, Oumagadoki Doubutsuen) manga, Boku no Hero Academia (My Hero Academia). They will begin the release in the magazine’s next issue. The publisher also announced that the manga will run simultaneously with Japan’s release starting February 9, 2015. There are currently two compiled Japanese manga volumes for the series. The first volume shipped on November 4, 2014 containing the first seven chapters. The second volume was released on January 5, 2015 including chapters 8-17. The third volume is planned to ship on April 3, 2015.

Boku no Hero Academia received a VOMIC adaptation (Shueisha’s Voice Comic) where the manga is shown on TV with special effects and character voice acting. The adaptation started on January 11, 2015 in Animax TV and has four episodes announced so far.