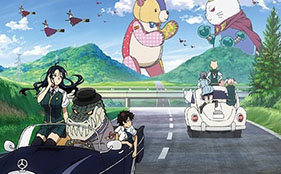 While the cover of the single for the ending theme Witch Activity looks suspiciously like the album cover of Kraftwerk’s 1978 album The Man-Machine.

and finally, the cover for the Witch Craft Works Original Soundtrack is the same as Kraftwerk’s 1974 breakthrough album, Autobahn.

This reminds me of when Cromartie High School was also inspired by various music artists’ covers for the DVD volume covers:

Last but not least, Cromartie High School DVD volume 4 cover was inspired by Deep Purple’s fourth album Deep Purple in Rock which was released in 1970.

Have you noticed something similar before? Let us know if you have in the comments below!