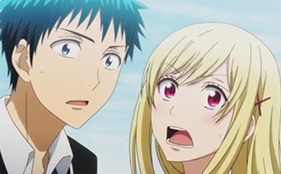 The official website for the upcoming TV anime adaptation of Miki Yoshikawa’s Yamada-kun to 7-nin no Majo (Yamada-kun and the Seven Witches) manga series revealed the anime’s first promotional video on Friday. The video previews the story as well as the opening theme “Kuchizuke Diamond” by WEAVER, and its ending theme “”CANDY MAGIC” by Mimi Meme MIMI.

Yamada-kun to 7-nin no Majo (Yamada-kun and the Seven Witches) will premiere in Japan on April 12 at 11:30 p.m. on Tokyo MX. A special program will air ahead of the broadcast on April 5 and 6.

The series itself received an online OVA adaptation in 2013 on August 25, and 2 additional OVAs have been announced to be released in the upcoming release of the manga’s volumes. The upcoming TV anime will have the same cast as the OVAs, which includes: