Yen Press stormed a blast of announcements on Anime Expo’s last day at their panel. With 8 digital releases and more than 10 for print. For digital release, they have acquired the license for the following:

The first license was a supernatural, psychological manga by Kujo Karuna, Aphorism. It was published under Square Enix’s Gangan Online magazine since May 18, 2010. It currently has 13 compiled manga volumes. The 13th volume was shipped on March 20, 2015. Yen Press announced that it is slated for November 2015. 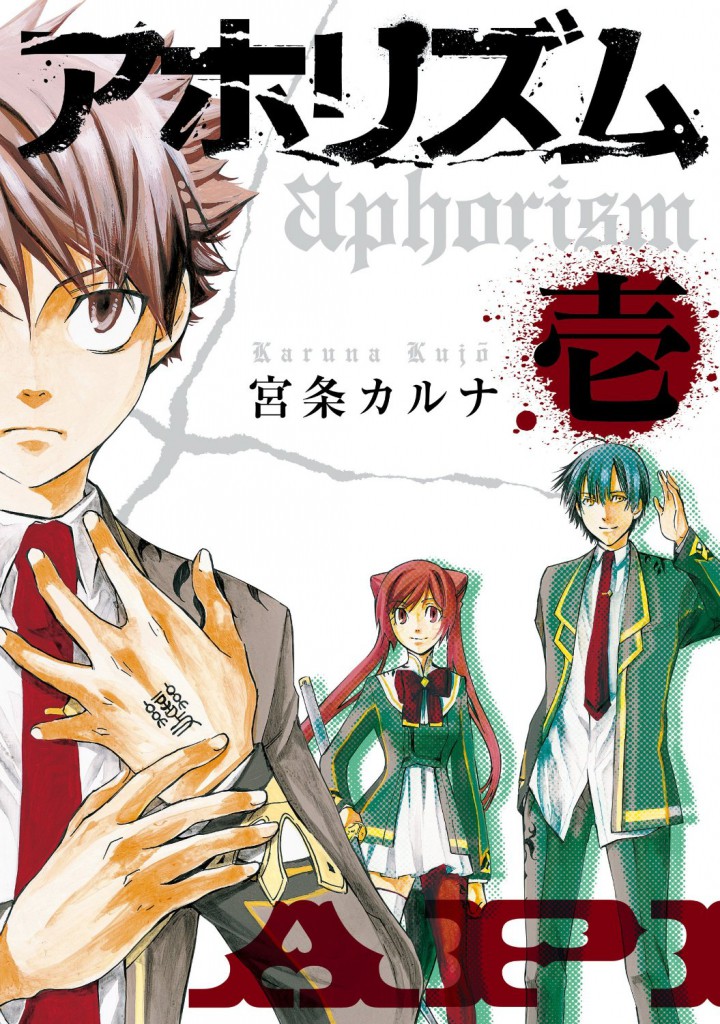 Synopsis of Aphorism from MangaUpdates:

Naraka High School is a seemingly normal school. However, unknown to the public is the cruel truth of what really goes on in the school’s halls. Rather than studying, students are forced to struggle for their very survival. And the strong bonds of friendship may be the only difference between life and death.

The supernatural, game, harem manga, Sekirei, by Sakurako Gokurakuin was the second licensed. The manga was published on January 30, 2004 under Square Enix’s Young GanGan magazine. It has 17 compiled volumes and the latest volume was published on March 25, 2015. Like Aphorism it is also slated on November 2015 digitally in English. 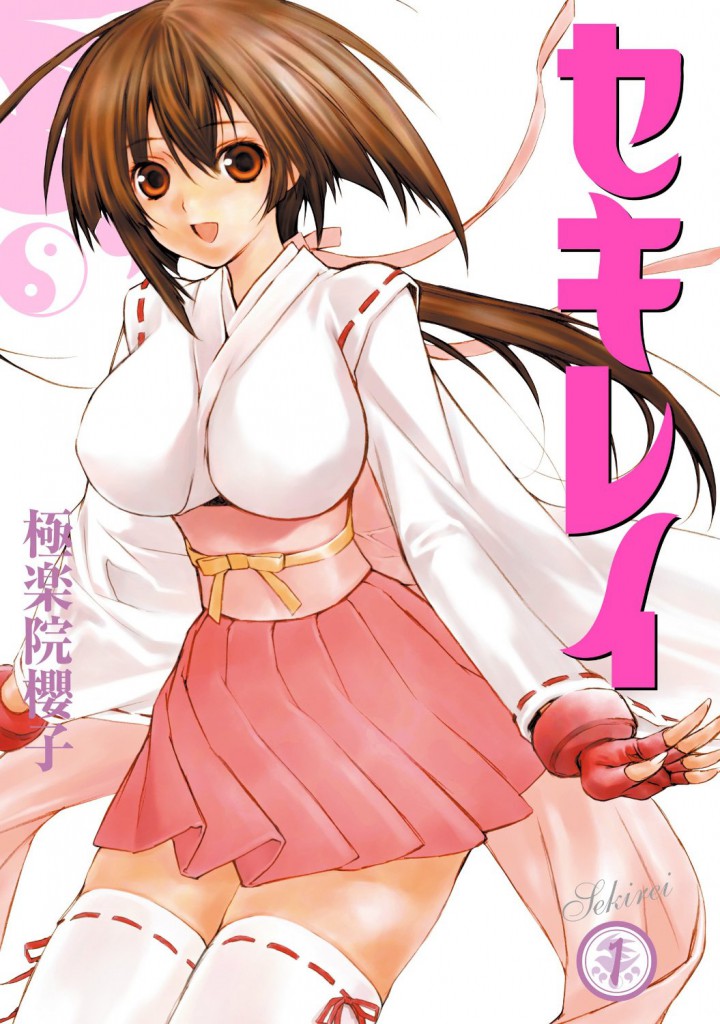 Synopsis of Sekirei from MangaUpdates:

Minato is a total loser. He’s failed to make it into college twice, he’s unpopular with women, and he’s unemployed. He seems like the classic-useless-shounen-harem-male-lead… In truth, however he’s actually an Ashikabi–one of a mysterious set of “masters” in an awesome battle royale between hordes of cute girls called “Sekirei.” Since this is an ecchi manga, with their attacks they often happen to… you guessed it–ripping each others’ clothes off! Looks like his luck’s taken a turn for the better.

Yen Press’ third digital acquisition is a slice-of-life sports manga by Ritz Kobayashi, Saki. It was published under Square Enix’s Young GanGan magazine as well since February 3, 2006. It currently has 13 volumes and the 13th volume was published on September 25, 2014. Yen Press have not specified the publishing date for Saki. 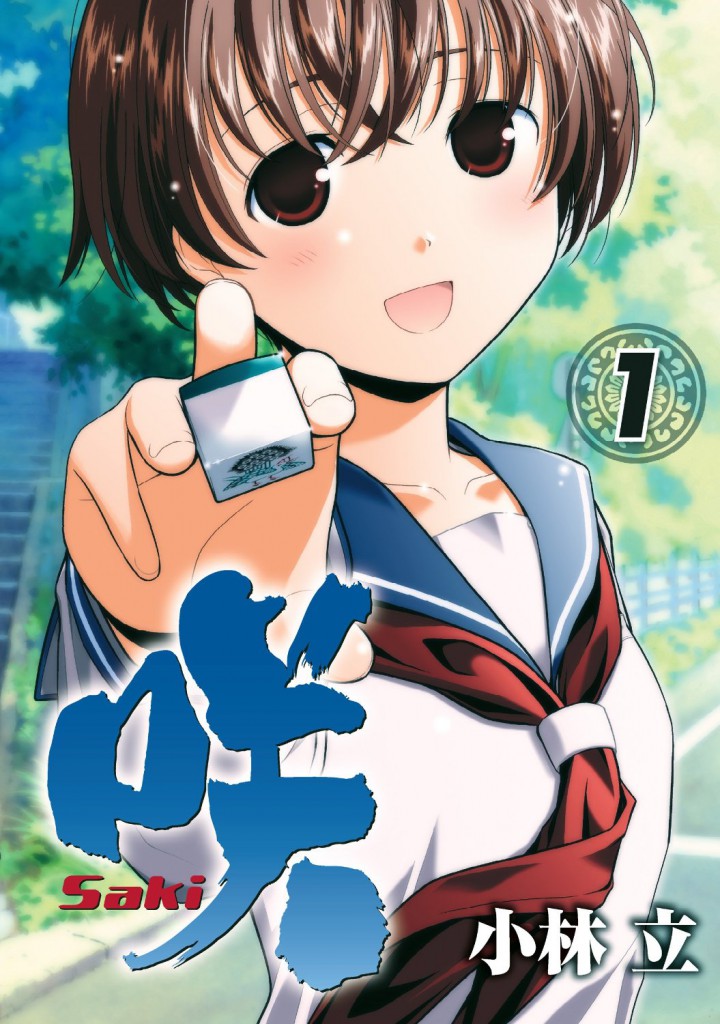 Synopsis of Saki from MangaUpdates:

Miyanaga Saki is a high-school freshman who doesn’t like mahjong. Ever since she was a child, she would lose her New Year’s gift money during her family mahjong game. If she won, her parents would be upset, and if she lost, well, she lost. As a result, she’s learned to play in such a way that her score always remains plus/minus zero: not good enough to win, but not bad enough to lose. When we meet her, she’s being dragged to her school’s mahjong club by an old friend. How will a girl who hates mahjong, yet has become adept at the game as a result of her upbringing, survive in this environment?

Kuro no Tantei is the fourth digital acquisition. It is a demon-mystery manga by Yen Hioka that was published under Square Enix’s Shoujo Romance Web Girly and Shounen Gangan magazine. The first chapter was published on February 12, 2013 and will end on July 10, 2015. It has six compiled manga volumes as of June 22, 2015. Yen Press have not yet announced the publishing date. 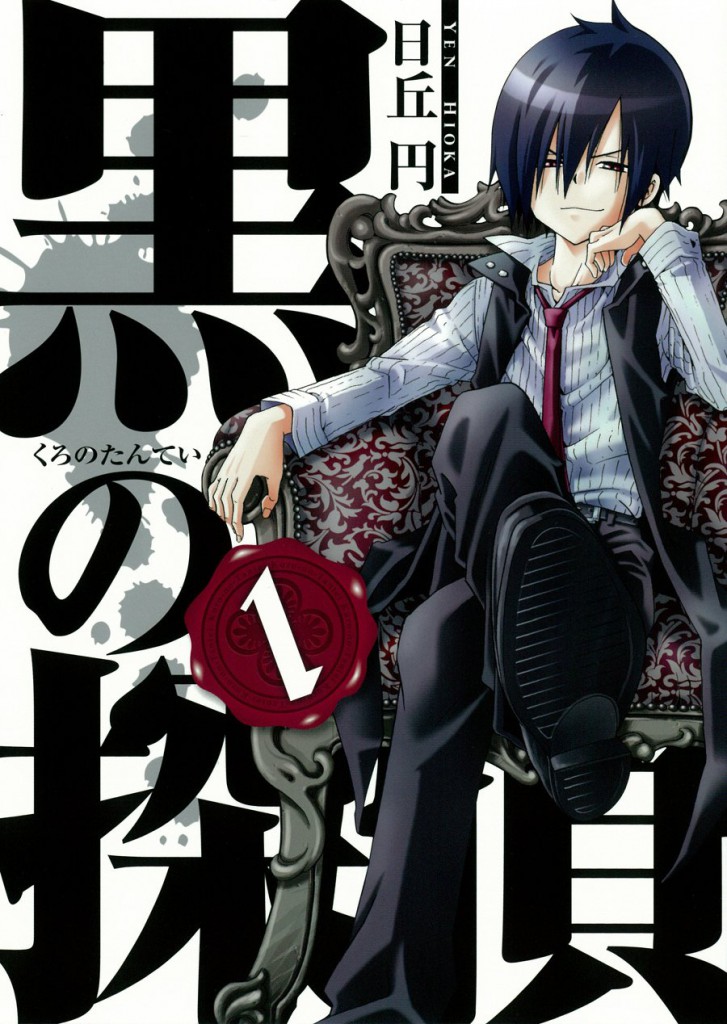 Synopsis of Kuro no Tantei from MangaUpdates:

Kuroba Yo is a sadistic detective who enjoys nothing more than destroying his targets emotionally and psychologically through his deductive reasoning. Toiro Arata is a naive and slightly masochistic boy who gets duped by Yo into becoming his assistant, or slave. These two team up to become the “Black & White” detective, solving crimes and chasing after criminals.

Aoharu x Kikanjuu by NAOE, with an anime adaptation that is currently airing, is the fifth acquisiton. The sports-comedy manga was published under Square Enix’s GFantasy and Gangan Online magazine since June 18, 2012. There are currently 7 compiled manga volumes as of June 27, 2015. Yen Press will publish the manga digitally this November 2015. 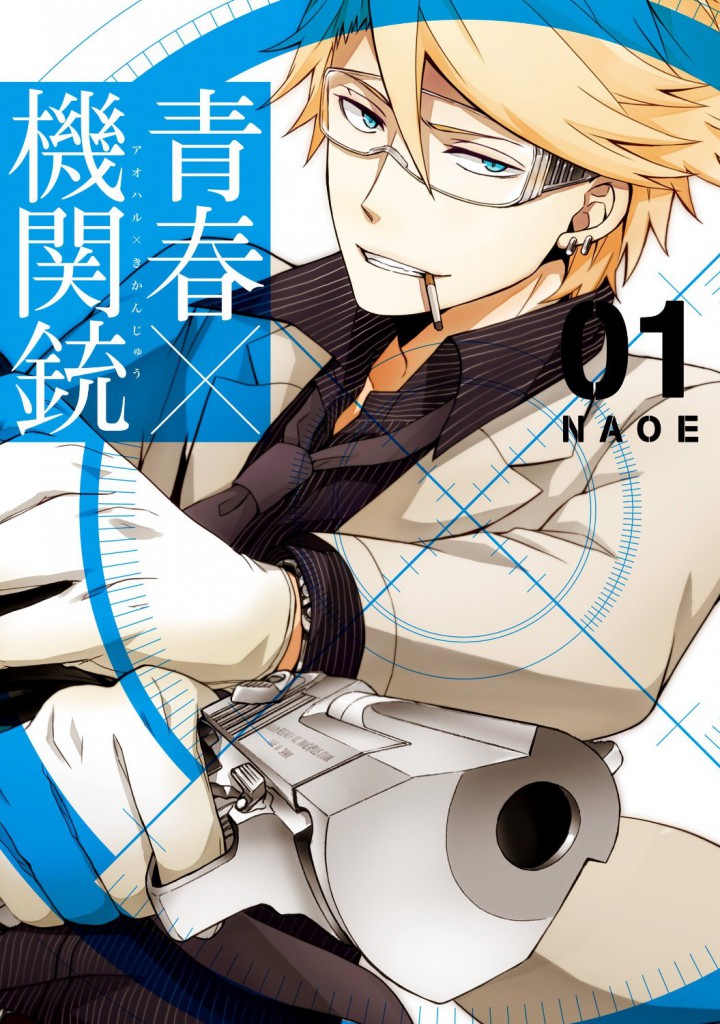 The manga follows high school student Hotaru Tachibana, a girl disguised as a boy. Through strange circumstances she finds herself drawn into the world of survival games by a host, Masamune Matsuoka. The two form a team with ero-manga artist Tooru Yukimura and aim to be the be the best in Japan.

Their sixth manga license was Shikabane Hime by Yoshiichi Akahito. The supernatural-shounen manga was published under Square Enix’s Shounen Gangan magazine. It has finished publishing, from April 12, 2005 to November 12, 2014 with 23 total compiled volumes. It is slated for November 2015, according to Yen Press. 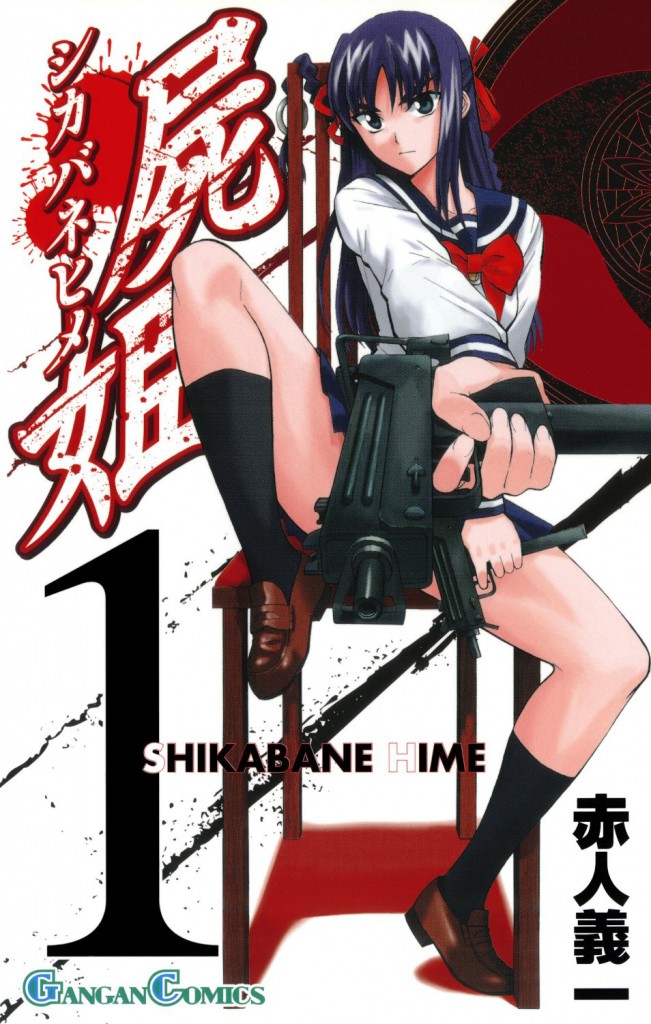 Synopsis of Shikabane Hime from MAL:

The story starts off with a bunch of high school students, taking the dare to go up to this abandoned building that has been half destroyed by a fire. It was rumoured to be haunted. Just a rumour, right? Not when real corpses start showing up, and they start feeling things grabbing them, and finally zombies going after them! Shikabane Hime is there to save the day. The immortal girl, “Shikabane Hime,” has the mission to “kill” 108 corpses. It’s a contract she has between herself and the Buddhist monk, Keisei. After 108 corpses, she will finally get her happiness and go to heaven.

Kurenai Ouji by Souta Kuwahara is the seventh license. It was published under Square Enix’s Shounen GanGan magazine since May 2005. It has 16 compiled manga volumes since August 22, 2014. Yen Press has not yet announced its publishing date.

.@yenpress at #AX2015 – Crimson Prince by Souta Kuwahara – a sweet story of a demon prince who falls for a human girl pic.twitter.com/B2jaI3t4jW 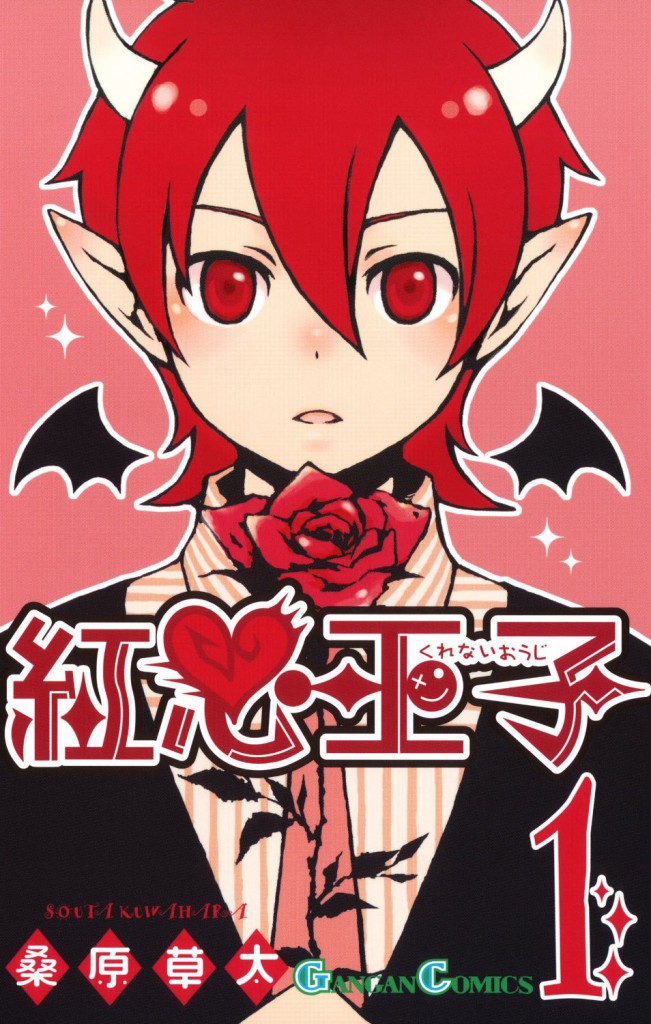 Synopsis of Kurenai Ouji from MangaUpdates:

Is their meeting a coincidence? Is their love inevitable?

Sakura Koujirou is a demon prince who descends to the human world in order to take human souls. But after a strange turn of events, he somehow ends up living with a human girl, Hana… This is a story of young love, sweet and touching.

The last digital acquisition was Renaissance Eve by Shamu Itou. The shounen series was published under Square Enix’s Shounen GanGan magazine since October 12, 2012. The manga was finished with 4 compiled volumes on September 12, 2014. Yen Press plans to release it this December 2015. 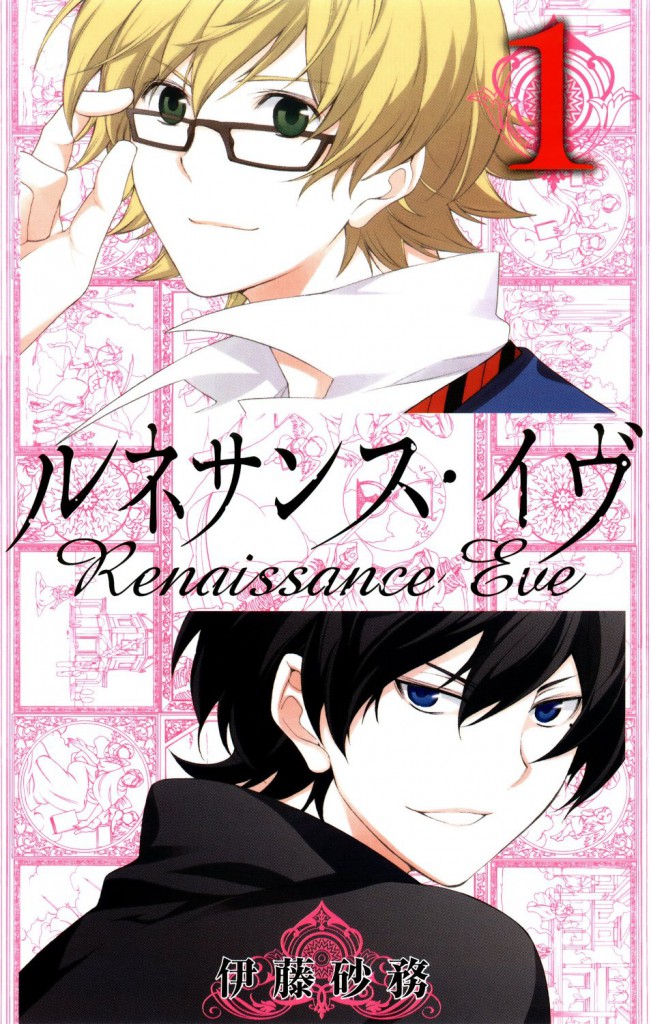 Chiaki’s bloodtype is C – he has a “strange blood.” The mystery surrounding his strange blood kickstarts a story about casuality and friendship.