On November 4th, 2014, Shueisha’s Young Jump magazine announced that the band amazarashi will perform the ending song for Tokyo Ghoul √A, the second season of the Tokyo Ghoul anime based off of Sui Ishida’s very popular manga that shares the same name. The song will be named “Kisetsu wa Tsugitsugi Shindeiku” and amazarashi will release a single for purchase on February 18th, 2015. 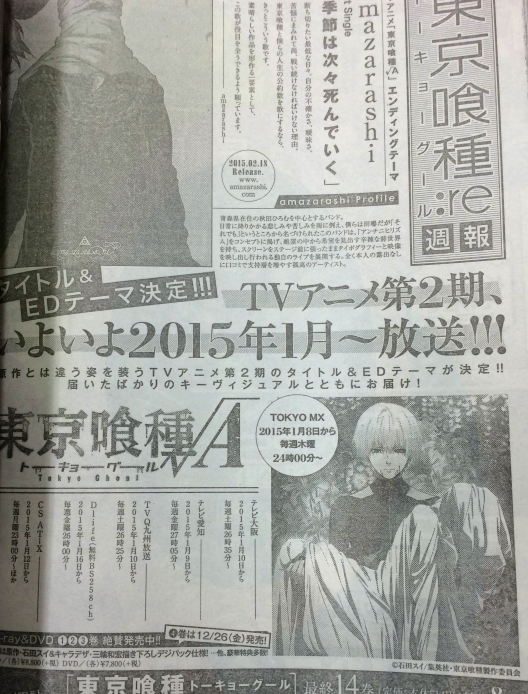 azaramashi is a band led by Hiromu Akita from Aomori. There is a very mysterious aura surrounding them, as they have never revealed their faces and use CG animations in their music videos. Not only this, when performing live, they have a unique style where they play behind a screen that covers the whole stage and projects various images to go along with the music. Their shows have been much talked about, and some say it gives the audience a sense of watching a film and enjoying live music at the same time. They have expanded their fan base by word of mouth, mostly through the internet, to such an extent that their latest album, Hey Mom, It’s Just As You Say, went up to the number 8 in the Oricon weekly album chart. They have attracted interest throughout the world and have won prizes at Annecy International Animated Film Festival in France, SIGGRAPH ASIA 2011, the world’s biggest computer graphics event, one dot zero 2011, a digital animation festival in London, and more.

Tokyo Ghoul √A will premier on January 8th, 2015, on the Tokyo MX station. Tokyo’s TOHO Cinemas Nihonbashi will host an advance screening of the first episode on January 4.

Tokyo Ghoul √A synopsis from Haruhichan: