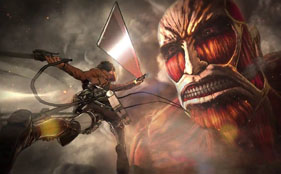 If you’ve ever wanted to see Eren fight Titans while dressed up like an employee of a Lawson convenience store, Omega Force’s Attack on Titan game has made that a reality. The costume as well as Armin’s Treasure Box-included Attack on Titan: Junior High costume when you pick up the action game at Loppi HMV.

Here is the trailer for the Attack on Titan game for the 3DS:

Attack on Titan is an upcoming video game based on the shounen manga series of the same name. It will be released this month in Japan and sometime later this year for North America and Europe for the PlayStation 3, PlayStation 4, PlayStation Vita. The title is being published by Koei Tecmo and developed by Omega Force. The game’s visuals will match that of the anime and retell key events of the story. You as a player will be able to use the 3D Maneuvering Gear to ascend to high areas as well as navigate around the Titans and hit their weak spot.