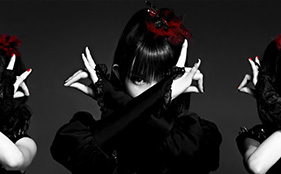 Japanese metal idol band, BABYMETAL, are in the middle of a world tour, and while in London the band attended the Kerrang! Awards, sponsored by the UK’s Karrang! music magazine. This wasn’t their first time attending, either. In 2015, BABYMETAL took home the organization’s Spirit of Independence Award, and this time they followed up on that success by winning Kerrang’s title of Best Live Band of 2016.

The upset occurred as 18-year-old Suzuka Nakamoto began her acceptance speech for winning the “Best Live Band of 2016” award, with 49-year-old award presenter Benji Webbe – singer for Welsh band Skindred – deciding it was OK to constantly interrupt her:

Soon after the event, Benji Webbe took to Twitter to deliver a “sincere” apology:

Sorry to anyone who thought I disrespect baby metal at the awards tonight, truly I didn't mean to fuck with them

Of course, many BABYMETAL fans have been finding it difficult to accept and have voiced their thoughts:

you've pretty much upset the entire fanbase, they're so polite to see that done to them even in jest was really disappointing

Despite your apology, I just want you to know how much of a low rent piece of garbage you made yourself look.