Camp was a Country/Rock band in ’91, led by the CHEEKO, they played a surprisingly pure Country/Rock rivaling that made on our side of the Pacific.

Releasing but one mere album named after themselves and with only eleven songs, they captivated me completely, their songs all have a soul of its own, full of joy and happiness and it’s all wrapped up by the sweet and playful voice of CHEEKO. 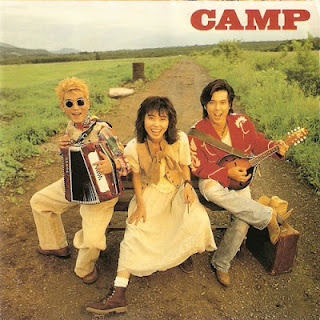 Of the eleven songs, “Small Town”, with its intense drumming and very upbeat guitar, it sets the mood for the rest of this great album

After a few songs we reach “Honest Boy” a nice little song where I personally fell in love with CHEEKO’s voice which is accompanied with a nice but modest violin.

Several songs later comes “Eighteen” while being one of the few songs that wouldn’t fit into the Country/Rock genre (It’s more Rock-Pop, with its “intense” guitar solo and what not) it’s one of the most charismatic and cheerful songs in the album.

As far as I know the band only released this album. I don’t know what became of the members, you can’t even find photos of the members; such is the life of the Japanese Indie Band.

That’s it for now, if you’d like me to talk about any specific genre be sure to tell me.