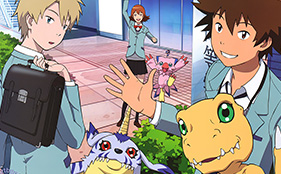 A brand new video has been streamed for the upcoming Digimon Adventure tri. anime film series. The new video is a preview of the anime’s Opening sequence, which uses the new rendition of the first season’s main theme, “Butter-fly” by Kouji Wada.