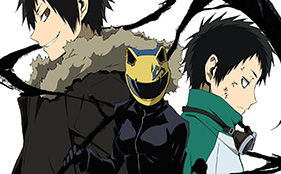 Known for having intense OPs/EDs, Durarara!! is back, and it’s just as incredible as ever. The visuals showing the dense urban streets of Tokyo, the – as usual – non linear OP exposits the cast of characters much in the same way as it always has, as well as includes a brief scene that is relevant to the episode. This has always made Durarara!! stand out, and it does so here too. The track for this season’s opening theme is “Day you laugh” by Toshiyuki Toyonaga, and it does its job of providing a funky track to show all the action on screen.

The ending animation is a fun little scrolling credits screen, but not in the way you think. It’s better to just watch it, as it can be quite fun to watch. The track is nice and upbeat as well, and the final second of the sequence I found pretty cute. The track used was “EXIT” by REVALCY. Watch the whole thing below!