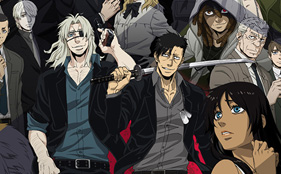 Ever since its announcement fans have been anticipating the release of this summer’s hot anime Gangsta. As an anime for more mature audiences who wish to stray away from the usual moe, Gangsta‘s OP and ED tracks sure pack a punch, and deliver their blows expertly to set the tone of the anime.

Witness below “Renegade” by STEREO DIVE FOUNDATION – the OP for the show accompanied by the opening animation. The style, the pace, the dark electronic feel to the track all come together to create this fusion. One could say it’s so good, it’s criminal! Not to mention the gritty animation sequence – some would say it’s reminiscent of recent masterpiece Psycho Pass.

As those who read the manga may know, Gangsta – while full of style and class, also comes with great characterization and emotional backdrop. Also posted below is the ED “Yoru no Kuni” by Annabel – a more mellow track, rounding off the show’s deeper tones. Definitely a somber, melodic acoustic track accompanied by Annabel’s beautiful vocals; it does its job of evoking ones emotions at the end of an episode.

We’re already placing our bets that many a tear will be shed by the time the last episode rolls around while this track plays. Have a listen.

Here’s the most recent commercial video for Gangsta.: