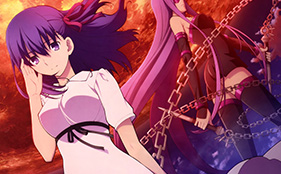 A brand new visual for ufotable’s (Fate/Zero, Kara no Kyoukai: Mirai Fukuin) upcoming Fate/stay night – Heaven’s Feel anime trilogy has been revealed in the June 2016 issue of NewType. This issue can be purchased here (get 5% off with coupon code MOE-N3Y-4YW0QK).

In addition to this, the Type-Moon Ace Vol.11 has also revealed a brand new visual for the series.

ufotable’s (Fate/Zero, Kara no Kyoukai: Mirai Fukuin) upcoming Fate/stay night – Heaven’s Feel movie will be releasing in Japanese theatres in 2017. There will be a total of 3 films.

The anime adaptation of Fate/stay night – Heaven’s Feel will consist of 3 movies. The films are currently scheduled to release in Japan in 2017. The full version of the new visual will be out with the magazine’s release.