After an interval of a few months, we at Haruhichan recieved yet another figure from our friends over at our favorite premium anime figure site E2046.com! This one is easily the one we’re most excited for yet, and we had been waiting for it to come in for quite some time. It is none other than protagonist of hit 2012 anime Sword Art Online; Kirito Kirigaya!

Being the most popular show of the year as well as a personal favorite of mine, we were absolutely psyched to finally have it for ourselves. The guys at E2046 masterfully brought Kirito to life with their expert workmanship and an attention to detail that would border obsessive. The result of course, is no less than amazing. 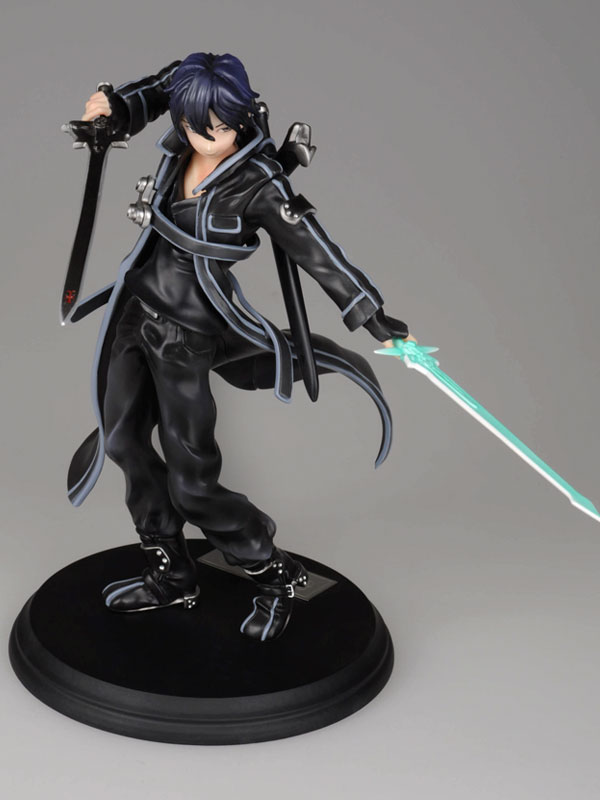 Wearing his signature all-black outfit he gained through leveling up in the game world and toting his famous dual blades (one of which he purchased from Lisbeth, as fans of the show would remember) Kirito strikes a cool pose as he holds the Dark Repulser (his green blade) extended outwards while holding up the Elucidator (the black blade) up to his shoulder level.

It’s a pretty stylized stance to be in, and the show was known for its epic sword fighting sequences with video game-like (literally) swordplay and posing, so it’s certainly representitive of Kirito’s character as the lone-wolf former beta-tester. 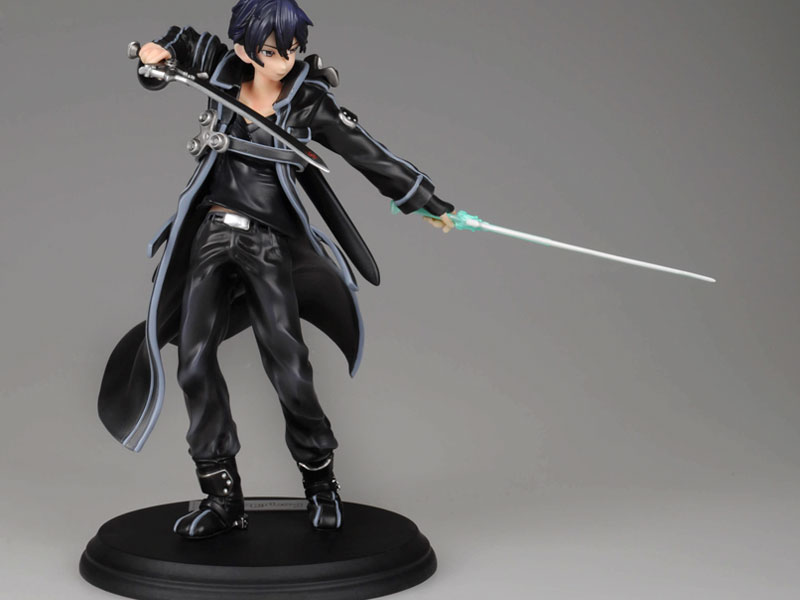 From the ripples in his pants to the fluttering of his coat, the famed solo player looks just as cool as he did in the show. One can even see the creases in every piece of cloth and from the tiniest details, such as the buttons on his boots up to more iconic pieces like the silver chestplate or his sword straps. Let’s not forget the detail of the swords themselves, each one being a precise copy of the ones shone in the series. The color, design, and texture are all top notch and the effort the designers put in really shines through. 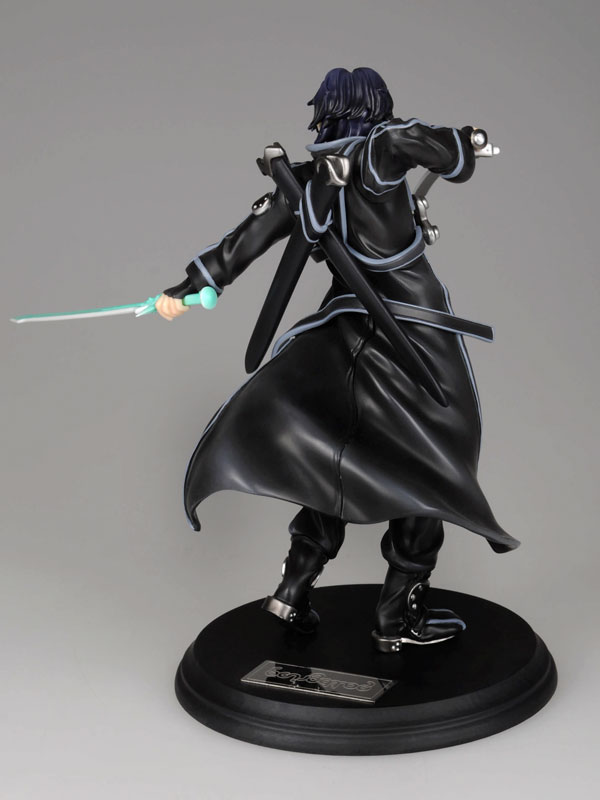 A rear view further demonstrates this attention to detail and strive for realism as the wavering of the back of his coat is in clearer view. The sheaths of his swords can also be seen and any comparison between this version and him in the show would that would be made would result in one coming to the conclusion that they are indeed almost identical. We checked ourselves!

In addition to the figure, the piece comes with, as displayed in the above photo, a stand on which to place Kirito as he poses stoically. As a “Gathering Surprise”, E2046 offer this black stand with metallic plate that really helps the figure stand out among your collection. If you have other E2046 products, however, it would go well with the collection! 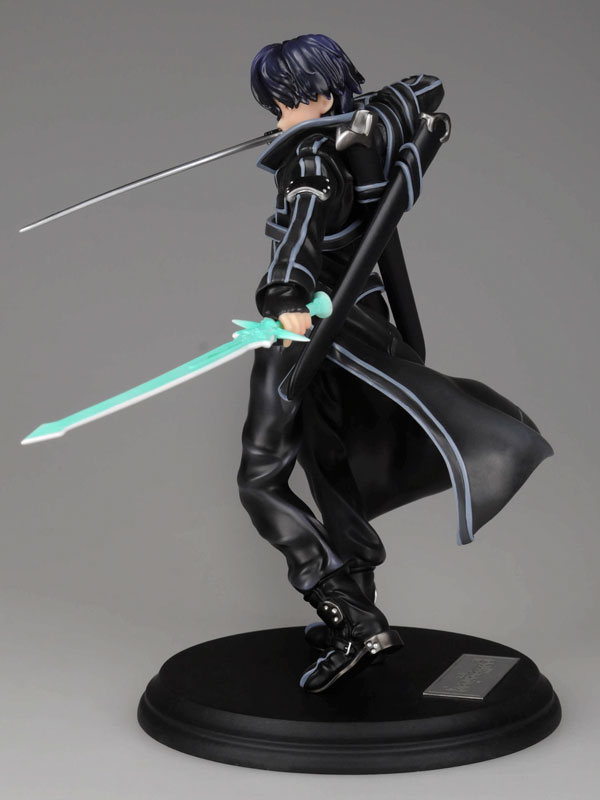 A side view offers unimpeded view to the Dark Repulsor as Kirito holds it parallel to the Elucidator. Although not complained about by customers, one should be careful with the swords, as too much pressure or force may cause it to bend, or even worse, snap off. But of course, a figure collector already knows how to take care of his collection, so hopefully no one will be facing any problems with that!

Kirito’s expression and hair are both the one he would wear most often in the show during battle sequences. His eyes narrowed and lips pursed, ready for action while his dark hair draping around his face, though windswept from all the fast movement. 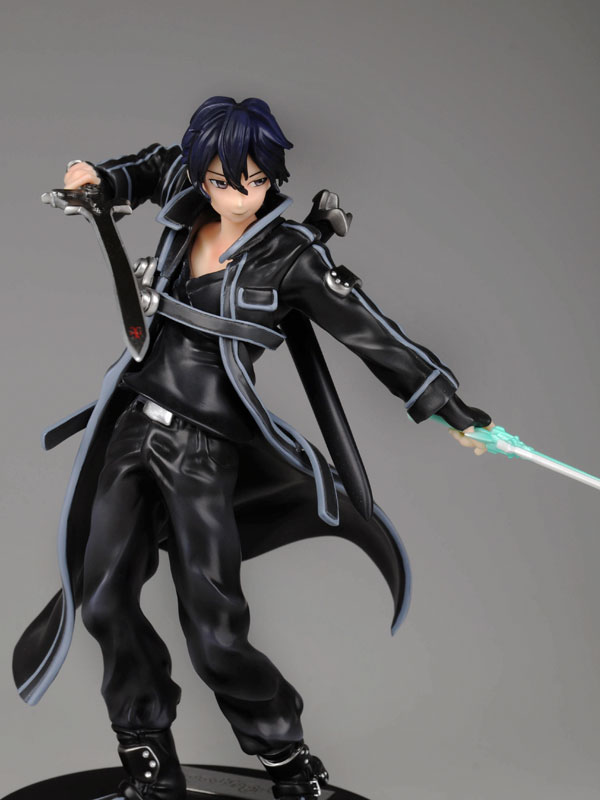 All in all, this piece is a definite must have for fans of Sword Art Online and figure collecting alike. Being the most iconic show of the year 2012 and perhaps the beginning of a long-lasting, memorable series, any person who calls himself a fan of the either subculture has to have this. Looks great and feels great. Kirito looks badass and handsome at the same time without comprimising his look from the original manga or show.

The figure stands at 19 and a half centimeters (a little over a foot) and weighs roughly a kilogram (2.2lbs). He comes in four pieces, so some minor assembly is required, but nothing too demanding. He is prepainted and pre-posed, leaving very little effort for the end customer. At a full price of over $180, this item is on a special 20% discount and thus available for only $145 right here at E2046.com! Paired with this gorgeous Asuna figure, I believe this would make for an excellent addition to any collection, or even just a great start to one! At just over $300, one could have both of them! An excellent deal, as that is the price of some solo figures. Having two main characters from Sword Art Online in the same collection? Now that’s something I’d certainly kill for. Order now and bring Kirito and Asuna to you as soon as possible and have a very happy Christmas indeed. Link Start!