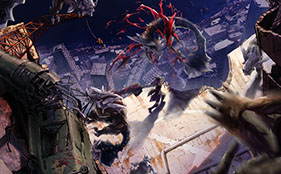 The official website for the God Eater anime has released the first key visual. The anime series is to be produced by ufotable, not much information about the series has been released, so expect more information in the upcoming months.

God Eater is an Action Role Playing, Hack ‘n’ Slash game developed by Shift and published by Bandai Namco Games. The games are set in a dystopian future Japan, where large monsters called Aragami have destroyed most of mankind. In the games you play as a God Eater, a small group of soldiers whose sole purpose is to defeat the Aragami using weapons made from the Aragami’s cells. A total of 3 games have been released since its start in 2010. The first game in the series released in Japan in February 2010 for the PlayStation Portable with an updated release titled Gods Eater Burst later in the year, where it also released internationally. A direct sequel to the game was published last year in Japan on the PlayStation Portable and PlayStation Vita. The game has been announced to be localised, but no date has been given yet.

A God Eater television anime series created by Ufotable has been announced.