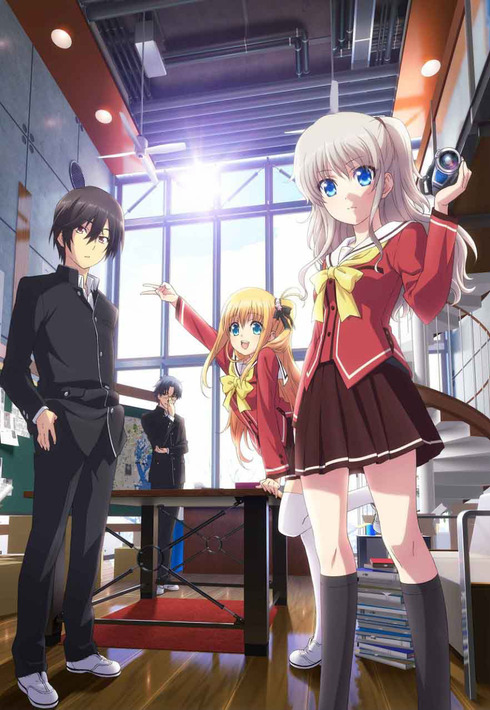 My most anticipated summer anime, besides the third season of Working!!!, was Charlotte. Being the huge Key fan that I am, it was almost natural for me to get behind the hype for it. For those who don’t know, Key is a company that produces visual novels. Key is known for their dramatic, supernatural slice-of-life scenarios as well as their very well-developed characters, all with enticing, but tragic stories that suck you into the world. You’ve probably heard of some of their works: Kanon, Air, Little Busters! However, they’re probably most well-known for their test of manliness in anime form, Clannad, and the extremely popular Angel Beats! Speaking of Angel Beats!, it’s been 5 years since the anime first aired back in 2010. To celebrate, Key is releasing visual novels for Angel Beats! this year, as it was an original anime at the time. As another 5th anniversary treat, the main composer and scenario writer for Key, Jun Maeda, announced Charlotte, another original anime to be done with the same staff that had worked on Angel Beats!

Charlotte presents a world where within our world, there exist some adolescents who exhibit supernatural powers. They could be as simple as pyrokinesis or the ability to teleport, to being able to house spirits. Yuu Otosaka possesses the power to take over someone’s body, but only for 5 seconds. He uses this power to quickly rise through the school ranks to become the top student in order to attend the most prestigious school in the area, and deal with anyone the way he wants to, usually for his own malicious intent. However, he is stopped by two students from another school, Joujirou Takajou and Nao Tomori, who also possess superpowers. The two of them take Yuu Otosaka under their wing to watch over him to ensure he uses his power for good. 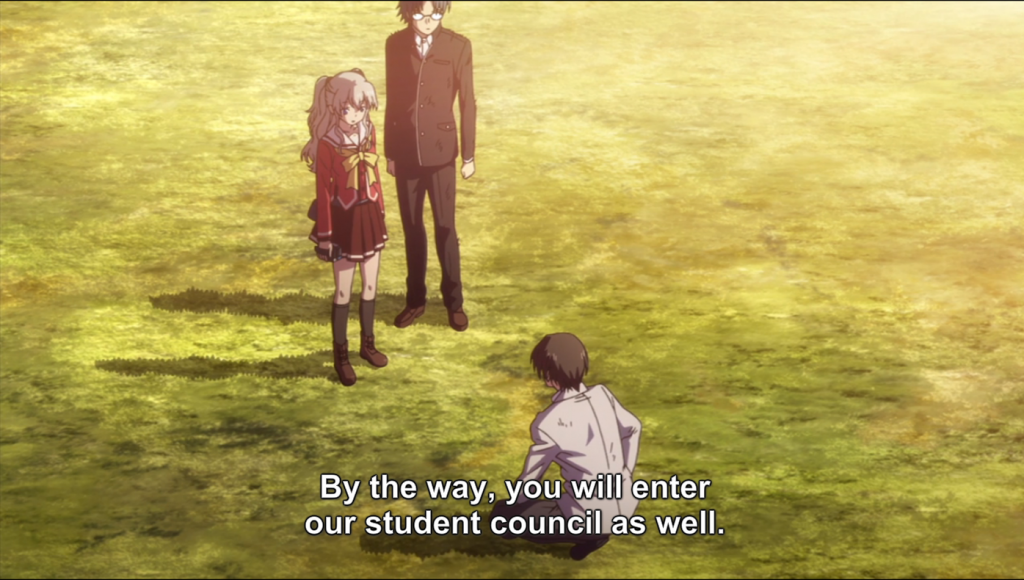 Right from the get-go, Charlotte presents an abnormal protagonist for something Key would normally make. He isn’t out to make friends and be a do-gooder. He’s a troublemaker by nature and throughout the opening episode, he does nothing but abuse his power for his own selfish ends. The following episodes spend more time explaining the world that Charlotte exists in. Despite how great these powers seem, there are flaws in their abilities, and displaying superpowers in public is sure to draw in human curiosity. That is something that Joujirou Takajou and Nao Tomori don’t want to see happen for reasons explained in the anime. The anime has already delved into backstories for a couple of the main characters, as well as explaining more about the world, which is good since the anime is only 13 episodes long. I find the longer a Key anime is, the better it is. The best part about Key is their excellent character development and learning more about the supernatural world that they’ve created. So, sticking to a smaller cast of characters in 13 episodes should still work out. The first half is usually for getting to know the characters, before diving into a world-changing event that forever changes the characters in the second half. That’s where things should get glorious (for us).

P.A Works has really stepped up their art in the years since Angel Beats!, as Charlotte looks really good. If you’ve seen Angel Beats!, or any Key anime really, you can see the similarities in artstyle. I think where P.A Works has really picked up their art is in their lighting. The lighting effects of Charlotte are really well done. The animation of Charlotte looks good for the most part, but a couple of bad 3D scenes stick out to me right now after the first couple of episodes. 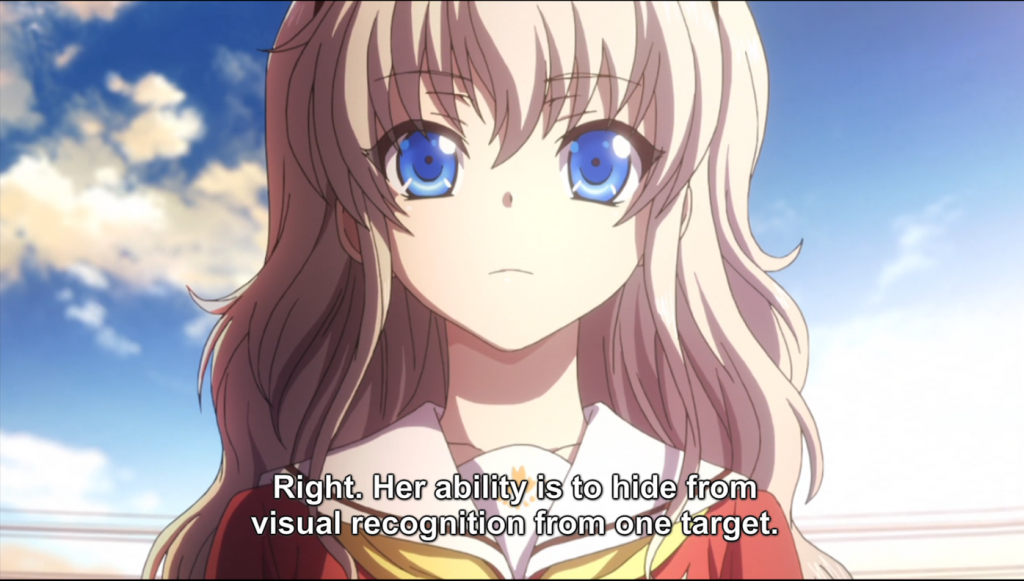 Jun Maeda is the original creator for Charlotte and he is also the primary composer. Jun Maeda has composed all of Key anime’s opening and ending songs, all of which are beautiful and powerful songs. Charlotte is no exception, bringing back singers Lia and Aoi Tada. For Lia, this is her fourth time working for Jun Maeda on a work of his (Air, Clannad, Angel Beats!, Charlotte). Lia is one of my favourite singers as she has a great voice to go along with Jun Maeda’s songs. Charlotte‘s opening, “Bravely You”, is another really good song to add to the list of current great songs by Key and Lia. There have been two ending songs so far, “灼け落ちない翼” (Yake Ochinai Tsubasa), by Aoi Tada, and “楽園まで” by Yusa Nishimori voiced by Maaya Uchida. “灼け落ちない翼” should be the main ending song, as the third episode was focused on Yusa Nishimori.

In terms of voice acting, there’s a few rising voice actors starring alongside veterans. Kouki Uchiyama (Seiya Kanie from Amagi Billiant Park) voices Yuu Otosaka and Ayane Sakura (Haru Onodera from Nisekoi:) voices Nao Tomori. The only issue I have with Ayane Sakura voicing in an anime like this is she usually plays comedic characters, at least from what I’ve watched anyway. I do primarily watch comedy, and I do know she’s been in more serious anime, but I can’t get her usual cheerful and energetic voice out of my head. For me, this is a good chance for to judge how well she handles more serious roles. Industry veteran Maaya Uchida voices Yusa Nishimori. Since she only just appeared in episode 3, I can’t really judge her just yet, but she showed her voice range early.

I’m pleased so far with Charlotte‘s progress. By doing character backstories early, they’re leaving plenty of time to prepare to tell the real story when it begins. The issue I had with Angel Beats! was its length and large cast, since they didn’t have time to properly flesh out every character in its large cast before it was over. I’m hoping that Charlotte will be able to properly tell its story and that it won’t be rushed. That’s the last thing I would want to happen to this anime. Like all Key anime, you need to be on board for the whole thing. If you can’t hold out until the end, then you’re better off leaving now. However, if you are interested, hang around until the end and let’s all feel together. If all goes well, Charlotte can reserve its place among some of anime’s best alongside Clannad and Angel Beats!

So, what do you guys think of Charlotte so far? Let me know in the comments!