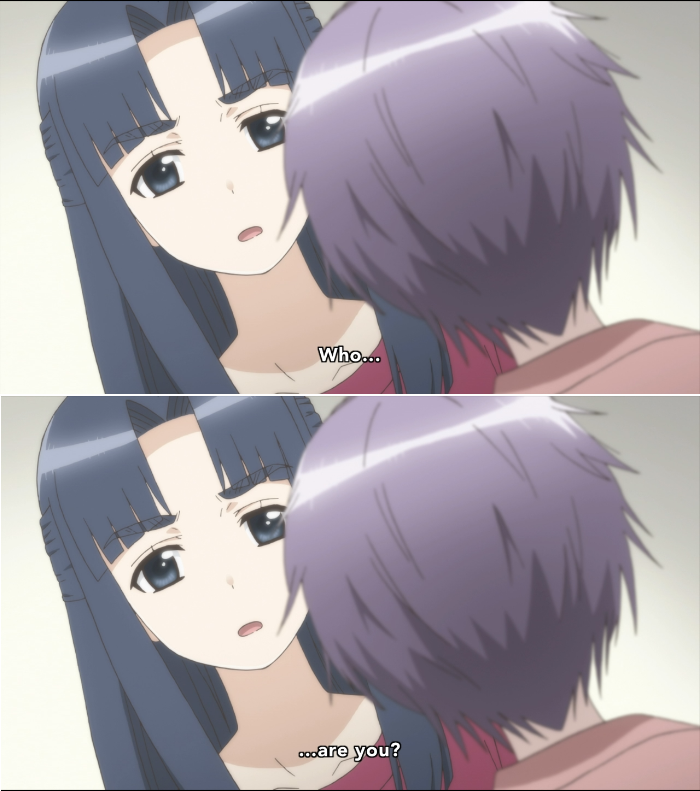 For a balanced anime fan, I would say The Melancholy of Haruhi Suzumiya series should be a must-watch. It contains the very essence of anime itself in its two seasons. It’s got a little of everything anime fans could possibly want. As such, fans have been clamoring for more ever since the conclusion of the movie, The Disappearance of Haruhi Suzumiya, three years ago. I suppose Nagato Yuki-chan no Shoushitsu, is a way to satisfy the fans hunger for more so hopefully, more of the main series can be made in the future. This is a spin-off of the main series, with the character Yuki Nagato taking center stage.

The story takes place in an alternate universe with the anime starting off where The Disappearance of Haruhi Suzumiya started. The events of this universe are different than the main story, where Haruhi did not attend the same school as Kyon and the others. The Literature Club was founded by Kyon, Yuki Nagato, and Ryoko Asakura. Just like the main series, the club is more or less just a front for their hangout spot. After Yuki Nagato was helped out by Kyon in the past, she fell in love with him. The anime is about Yuki Nagato trying to confess her feelings to Kyon and enjoying their regular everyday life.

I was a big fan of the movie, which takes place in the same general universe where Haruhi and the others have no supernatural powers and they have ordinary lives. However, the supernatural element of the main series still hovered over the movie, which is why I might have enjoyed the movie so much. Even with the fun cast of characters from the main series, I couldn’t help but feel bored with how the story is presented here. It feels too generic. In addition, the main cast also acts differently than before. Yuki Nagato, in the main series, is a super-powerful alien who shows no emotion and Kyon is a cynical straight man that gets bullied around by Haruhi. In this series, Yuki Nagato is an extremely shy and quiet girl and Kyon is just a generic dense nice guy. I think if it weren’t for the fact that I am already in love with these characters, especially Yuki Nagato as one of my all-time favourite anime characters, I would have dropped this anime like a hot potato after the first couple of episodes.

The series does gain a little more ground after Haruhi makes her entrance, and whenever Haruhi is involved in an episode, it felt more and more like the old series was back. Haruhi really made the series in the first half, and if you didn’t drop the anime after the first couple of episodes, you were likely to stick around because of Haruhi.

The second half of the anime was much more interesting as the story ramped up with a throwback to the main series. This part of the story was way more interesting than the first half as it presented the audience with a clear continuous arc that lasted a few episodes. This arc was pretty exciting if you are a Yuki Nagato fan. It’s a shame I can’t say the anime as a whole ended on a pleasant note though. The ending was pretty disappointing and not at all how I think anyone would have wanted things to turn out.

I can’t help but feel like the romance could have been handled better in the main series, and this was the chance to really expand on it. Unfortunately, this is probably not the love story you were looking for. This also doesn’t contain the gripping supernatural elements of the main series. However, if you liked the regular slice of life episodes of the main series, you’ll probably be satisfied with what you get here.

The anime’s visuals aren’t bad, but it’s hard to adjust to how the characters look here if you’re coming from the main series. I know the artist changed for this spin-off, but it’s still jarring to see the change in these characters that you’ve known for years. The animation is average, but I was starting to notice a drop in animation quality near the end of the anime, and especially in the last episode. Overall, nothing really special here, especially if you compare it to the main series art. I know it’s not really fair to do that, but it’s hard not to do so.

Hearing the original cast of The Melancholy of Haruhi Suzumiya reprising their roles again was a real treat. It just wouldn’t be the Haruhi Suzumiya series without Aya Hirano behind the boisterous Haruhi Suzumiya, and Tomokazu Sugita as the cynical Kyon. Even with the visual change, I still felt right at home when the characters spoke, since it was just like how I remembered them. The only change I had to get used when it came to voice acting was Minori Chihara as Yuki Nagato, since she now displayed emotions. Even so, when I heard Yuki Nagato in The Disappearance of Haruhi Suzumiya, she sounded different than the Yuki Nagato here. The whole time I was watching this series made me wish for the old Yuki Nagato back since that is what I’m used to.

I can’t fault Minori Chihara for her singing though. The ED, “ありがとう、だいすき” (Arigatou, Daisuki) is a beautiful love song that makes you wish for the romance that could have come out of this series. I found myself always waiting for the end of the episode so I could listen to this song again. The OP, “フレ降レミライ” (Fure Fure Mirai) features all of the main female cast, just like the EDs of the main series. While the main series’ EDs are fun and high-energy, I don’t get the same feeling from “フレ降レミライ”, although I can tell they’re trying. There’s not much to say about the background music. However, they do bring back a couple of classic themes from the main series that plays on occasion. You remember the music that plays in the background whenever Haruhi is explaining one of her schemes don’t you?

Nagato Yuki-chan no Shoushitsu isn’t quite the return to form that I wanted for the series. I know I shouldn’t have had my hopes up so high because it’s a spin-off, and I really did want to love this anime, but in the end it fell flat. It doesn’t have the charm of the main series, and the visuals aren’t there. However, if you love these characters, and like the slice of life element of the series, I think you can find something to like here.

+ The Disappearance of Yuki Nagato arc

+ Still features the same memorable cast of characters but…

So Haruhi fans, what did you think if you watched it? Let me know in the comments!