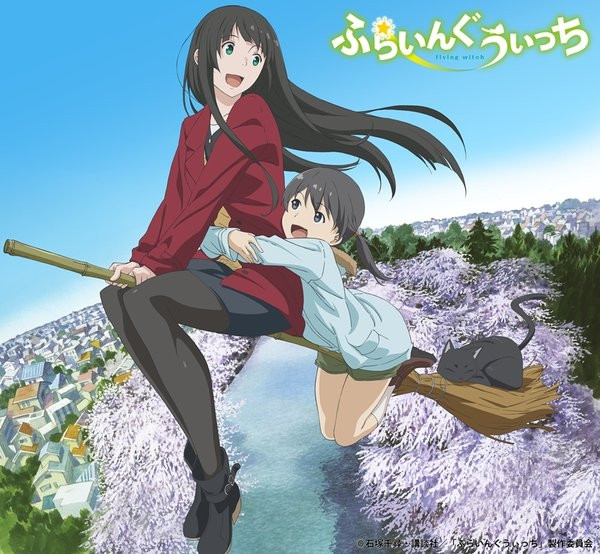 A few slice of life anime this season are choosing to ditch the usual city/school life to tell a more tranquil tale of life in the countryside. In fact, a couple of my favourites this season, Kuma Miko, and this anime Flying Witch, both take place in northern Japan which is a fairly rare occurrence. These two make for a good watch if you want to relax after something stressful. I’m going to focus just on Flying Witch on this First Impressions. Flying Witch is a bit more interesting, but if you need a dose of moe this season, I would recommend Kuma Miko since its female lead is absolutely adorable and her personality contrast with the male lead makes for some funny and heartwarming moments.

Flying Witch focuses on a novice witch, Makoto Kowata, who moves to a small town in northern Japan to live with her relatives. In this setting, witches live among us and are not always shy about performing magic in front of other humans. Witches have their own societies, but are otherwise included along with normal humans. Once she arrives she reunites with her cousins, Kei Kuramoto and Chinatsu Kuramoto, regular humans from a farming family. While Kei knows of her cousin’s magical abilities, Chinatsu is unaware and quickly becomes interested in Makoto’s witchcraft.

As a slice of life anime, there’s no central plot and the anime focuses more on characters than anything else. It’s always nice to have some sort of other element to a slice of life anime to help spice things up a bit. Each episode usually revolves around Makoto meeting someone from the magic world, and they usually teach her something new about the world she only knows so much about. It’s also an experience for Chinatsu who is seeing magic for the first time in her life and she is enthusiastic with seeing magic, although she often has fun reactions whenever she meets an odd person who practices magic. The new characters appearing in each episode is what keeps everything moving forward, and Makoto can be seen practicing more and more magic with each episode.

The anime itself has a nice artstyle with animation par for the course for a slice of life anime. For some odd reason, the opening animation has a weird green tint over it that’s kind of distracting for me, but no other complaints besides that. J.C Staff can usually crank out some quality work with both art and animation, so it’s good to see that it’s remained consistent so far.

The main cast consists of new voice actors, a couple of whom are getting their first ever roles in an anime. Minami Shinoda, who voices Makoto Kowata, and Shinsuke Sugawara, who voices Kei Kuramoto are two completely new voice actors. While I like Minami Shinoda, who sounds like she’s been in the business for a while, Shinsuke Sugawara sounds a little stiff. Maybe this will change later on, but that’s my initial impressions of the two of them. Both of Flying Witch’s opening and ending songs are nice and relaxed, which helps set the tone for the series as a whole.

As I mentioned at the start, Flying Witch is great for anyone who wants to watch something calm and soothing. Flying Witch brings in a fun dash of magic to a slice of life anime that helps make things interesting and give you something to look forward to every week. If you have some time, it might be worth checking out to see if you like it.

What do you think of Flying Witch if you’re watching it? Let me know in the comments!